Apple's history of iPhone docks is rather hit-or-miss, with the company's recent designs generally tailored tightly to the profiles of the iPhones they were designed for, preventing the use of cases on the iPhones and making the docks incompatible with later iPhone designs.

That changes with the new iPhone Lightning Dock, introduced yesterday a full eight months after the launch of the iPhone 6 and 6 Plus. The new dock forgoes a form-fitting iPhone-shaped depression in favor of a simple Lightning connector embedded in a small, slightly pliable nub to cushion the device as it rests on the connector. 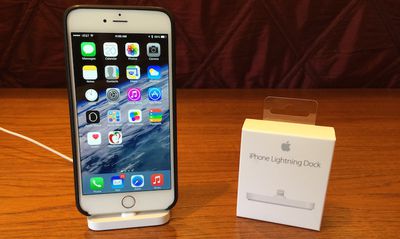 iPhone 6 Plus with Apple Leather Case on iPhone Lightning Dock
The design has some advantages: it offers a clean and simple look and it'll fit any iOS device with a Lightning port, including many of those with cases. The lack of a recessed docking area also keeps the iPhone's Touch ID home button easily accessible while the device is docked.

There are definitely some downsides, however, with the most obvious being stability. With the Lightning connector being the sole means of support for the iPhone, the device does tend to rock side to side if bumped. And while the Lightning connector is very firmly embedded in the base of the dock and does not feel in danger of being damaged, users may have concerns over potential damage to their iPhone's Lightning port if the device should happen to be bumped strongly while mounted on the dock.

For those who aren't terribly concerned about the potential for accidental damage, the dock works well. It's easy to mount the iPhone on the dock, and removal is also simple and possible to do one-handed by pressing down on the base with the side of your hand as you lift the iPhone off the dock. General stability against tipping is solid, as the weighted dock base means it doesn't feel top-heavy with an iPhone mounted on it.

iPad Air 2 with Smart Case on iPhone Lightning Dock (not advised)
The dock is officially compatible with all iPhone and iPod touch models with Lightning connectors, but yes, it will work with iPads as well. It might not be a great idea, however, as the much larger iPads are considerably less stable on the dock and the potential for damage to the Lightning connector or port is significantly higher with the possibility of greater torque on that single point of contact.

The rear of the iPhone Lightning Dock contains a Lightning port to allow you to use a standard Lightning to USB cable to connect to a power adapter or directly to a computer, as well as a 3.5 mm audio out jack. The jack allows you to connect powered speakers or headphones to make it easy to play audio from the iPhone immediately upon docking the device. Headphone remote functions are also supported through the dock, allowing users to easily control playback and adjust volume.

As is typical for Apple's accessories, the iPhone Lightning Dock at $39 isn't cheap. Given the length of time it's been since the latest iPhones were launched, there are an array of cheaper dock options available and other docks at similar or higher price points are frequently more substantial and offer greater physical support for devices resting in them. But for those users who prefer to keep their desktop environments as Apple-branded as possible, the new iPhone Lightning Dock is a reasonable option that should hopefully remain compatible with new models well into the future.

Does the dock come with a lightning cable?

Mike Oxard
Does anyone else have problems with lightning cables? My family seem to get through one a month!
Score: 7 Votes (Like | Disagree)

nagromme
I wouldn't touch this with a 10-foot pole if I was someone who EVER touches the iPhone while charging. Which I am. (And I know there are others who can still use this: for charging while asleep, say. But why not just charge flat, then?)

If someone nudges you or your foot slips while tapping an icon (or swiping Notification Center) near the top--or you just misjudge the feather-light tap you intend--you could apply MASSIVE force to your iPhone's Lightning port. And how about your half-asleep flailing arm in the morning when the alarm goes off? (Worse: imagine using it with an iPad/Mini, which some are bound to do: it's a an available charger, after all.) Plus, the audio-out encourages use of the device while docked.

Normally I'd say Apple's engineers aren't going to miss something obvious and fail to plan/test for it--so I half expected the connector on this to be very loosely flexible, for instance. But if it's too stiff--and it seems to be--I have to side with physics on this one. (And if it IS very bendy, that would make it harder to use the phone.)

Luckily third-party docks (some with adjustable back support) are still to be had.
Score: 7 Votes (Like | Disagree)

1) DAC and audio out jack

2) a plug-in lightning port. there are times on my other docks where ive wanted to charge something outside of the dock but could not. this fixes that.

for $39 it's much cheaper than my $89 ElevationLab dock (the famous kickstarter one), which pretty much sucks for an iphone 6 due to the dock's absurd size, and doesnt allow me to use headphones or unplug its cable.

This doesn't look like it was Designed by Apple.

nonsense. it looks almost the same as their other lightning dock for the iphone 5:

(Worse: imagine using it with an iPad/Mini, which some are bound to do: it's a an available charger, after all.)

we dont have to imagine -- there are photos of that in the review.

also, you can unplug the lightning from the rear of the dock and plug it into your ipad if you wish.

The full article states: "General stability against tipping is solid, as the weighted dock base means it doesn't feel top-heavy with an iPhone mounted on it".

If true, I may buy this. But I'll let someone else check that first, please.

thats what the review is for.
Score: 4 Votes (Like | Disagree)

Does anyone else have problems with lightning cables? My family seem to get through one a month!


We have eight cables (two offices, two cars, two sides of the bed and two in the kitchen/living room). Zero issues. All are the apple cables except the one in my car (apple certified though).

Edit: Have owned most of them for two years and they look brand new.
Score: 4 Votes (Like | Disagree)
Read All Comments