In macOS, the Hot Corners feature turns each of the four corners of your screen into a designated action, allowing you to quickly access certain functions built into the system, such as Mission Control, Notification Center, the Screen Saver, and more. Many Mac users would agree, there's something satisfying about bringing up these commonly used functions with a simple, swift cursor movement. 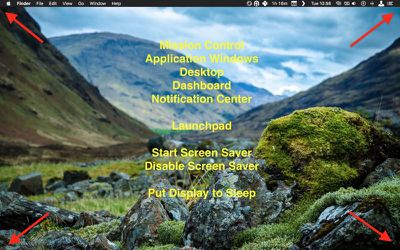 What isn't so satisfying, however, is accidentally triggering a Hot Corner, which can lead to all kinds of unintended desktop behavior - like application windows flying all over the place. This can happen when you lose track of the mouse cursor, or when you're working within the confines of a small MacBook screen. Thankfully, there's a way to tame wayward Hot Corners using modifier keys. Here's how.

How to Combine Hot Corners With Modifier Keys

The next time you come to use a Hot Corner, hold down the modifier key as you move the mouse cursor towards it, otherwise the action you assigned to that corner won't work!

tarsins
Superb tip. That's what I like about Macs: no matter how long you've been using them there's always something new to learn.
Score: 6 Votes (Like | Disagree)

497902
For a second I thought macOS Hot Corners would be the name of the next macOS version. lol
Score: 3 Votes (Like | Disagree)

martyjmclean
Mine are so tame, they’re off. :D
Score: 3 Votes (Like | Disagree)

R10k
Great tip! I know a crazy amount about the Mac but this is new!
Score: 1 Votes (Like | Disagree)

I don't know anyone who knew of this. Nice writeup.

Generally in the Mac's UI, there are often alternate commands available when, aptly, you hold down the Option key. As a fun (for nerds anyway) experiment, click menus in whatever app you're using and hit Option, see what changes.

Here's Safari > Edit menu with and without Option pressed:


Many Mac users would agree, there's something satisfying about bringing up these commonly used functions with a simple, swift cursor movement.

Hot corners and screen edges are great for triggering things in a cursor-based interface because they're such an incredibly easy target to hit. This is one of the first things Apple did better than Windows, which always put your menu bar inside the window so you have to be way more careful with your cursor targeting. On the Mac, you just shove your cursor UP as much as you want and you know it'll stop on its own.

But yeah, it's a little too easy sometimes. What I really want is a tiny time delay for hot corners so they still work without extra key presses, but you're buffered against your cursor inadvertantly triggering something you don't want.