How to Use Siri on Apple Watch

Anyone with an iPhone 4S or newer knows how to use Siri. Even if you've never used the "Hey Siri" feature on iOS 8, you can probably figure it out fairly easily. However, on a completely different device, like Apple Watch, accessing Siri may need a little bit of extra training. 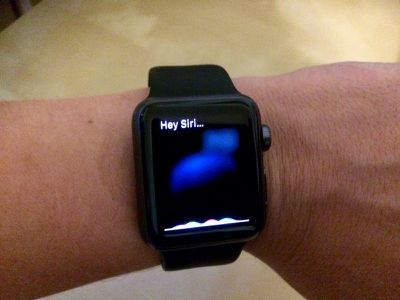 If you are having trouble getting Siri to activate, we've got a tutorial that may help shed some light on how to get her attention. Plus with one simple question, you can find out everything that your personal assistant can help you with on Apple Watch

You can get Siri's attention by raising your wrist and speaking the words "Hey Siri" within range of Apple Watch. You can also ask follow up questions the same way.

You can use Hey Siri while you are viewing an app, in the Notifications screen, or on the Home screen. But if you are having trouble getting her attention, try the steps above.

One other reason that you may be having trouble using Hey Siri is if the microphone is blocked. Apple Watch's microphone is on the side of the casing, so if you have a bulky jacket sleeve up against the side where the mic is, it may muffle your voice.

What Can Siri Do?

Although the personal assistant can help you out on Apple Watch, it isn't quite as robust as it is on the iPhone and will offer to hand off some functions like restaurant reservations to the iPhone. If you'd like to see a list of things that Siri can do, say the words, "What kinds of things can you help me with?" Or, if you prefer brevity, just say, "help."

The long list includes the various functions that Siri can perform, like setting alarms, opening apps, making phone calls, and sending messages. Weather, maps, music controls, sports scores, stocks, basic Q&A facts, and Bing-powered web image searches are all supported through Siri. Plus, each item includes a list of example sentences you can say to activate a feature.

There are a few unique commands on the Apple Watch -- try asking Siri how many steps you've taken or how many calories you've burned during the day. Siri will open up the Activity app to the proper screen to let you know.

Siri on Apple Watch may seem a bit like a new employee at first, but just like the personal assistant on your iPhone, it will grow more robust with time and Apple will undoubtedly add more features as time goes by. With the watch's small display size prohibiting an onscreen keyboard, Siri is one of the key ways to interact with the Apple Watch, so Apple is clearly putting significant effort into making it work well.

QuiteSure
A surprisingly great use for Siri on the Watch: setting appointments while sitting at my computer. It's great to just wake up my watch, say "Hey Siri, create an appointment for tomorrow at 10 am John Smith". Siri creates the appointment, the sync with my desktop computer is almost instantaneous and I've accomplished in just 5 seconds what took me somewhat longer to do using the Mac's Calendar app and the keyboard.
Score: 3 Votes (Like | Disagree)

Uh.. It's the same as it in on the iPhone. Tap and hold, or use Hey Siri. How is this complicated in comparison?


Didn't you read the article? The entire first half (about 8 paragraphs!) is explaining the various situations in which Siri may have problems or simply won't work.

If the watch UI is in the wrong state then there are multiple steps required to activate Siri. On an iPhone it's always available and always easy!
Score: 2 Votes (Like | Disagree)

I don't understand why Apple had to go and make Siri so complicated on the Apple Watch that MacRumors has to explain to us how to use it.

Siri should be simple. Apple Watch engineers should hang their heads in shame. They bring dishonor upon their company. Shame on them! Shame on Apple!


Uh.. It's the same as it in on the iPhone. Tap and hold, or use Hey Siri. How is this complicated in comparison?
Score: 2 Votes (Like | Disagree)

I don't understand why Apple had to go and make Siri so complicated on the Apple Watch that MacRumors has to explain to us how to use it.

Siri should be simple. Apple Watch engineers should hang their heads in shame. They bring dishonor upon their company. Shame on them! Shame on Apple!


Is that sarcasm? Doesn't sound too hard to me. Over time things will be refined just like on the iPhone.
Score: 2 Votes (Like | Disagree)

Reason077
I don't understand why Apple had to go and make Siri so complicated on the Apple Watch that MacRumors has to explain to us how to use it.

Siri should be simple. Apple Watch engineers should hang their heads in shame. They bring dishonor upon their company. Shame on them! Shame on Apple!
Score: 2 Votes (Like | Disagree)

About Siri. Other than playing with it, I haven't used it much on the Watch.
Have any of you found compelling or more convenient applications of Siri on the Watch vs. the iPhone?


Without a keyboard for input, Siri is much more compelling/convenient on Watch compared to iPhone. Great for sending quick messages.

Thursday February 4, 2021 1:58 am PST by Tim Hardwick
Serif today announced across-the-board updates for its popular suite of Affinity creative apps, including Affinity Photo, Affinity Designer, and the Apple award-winning Affinity Publisher for Mac, all of which were among the first professional creative suites to be optimized for Apple's new M1 chip. "After another year which saw record numbers of people switching to Affinity, it's exciting to...
Read Full Article • 89 comments