How to Use Siri in macOS

Since macOS Sierra, Apple has included its well-known personal assistant, Siri, for the Mac. Siri for Mac differs from iOS' version of Siri in several ways, taking advantage of the larger real estate of a Mac's display and the Finder file system. Users can also easily transfer or pin Siri's search results to the Notification Center or documents they're working on. To help you get started with Siri for Mac, we've put together a guide outlining what it's capable of. 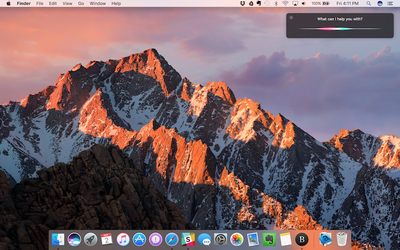 There are four ways to activate Siri in macOS. Two of the methods are visually obvious while the third is not. The availability of the fourth handsfree method depends on the model of Mac.

Siri can be enabled two ways. While you're installing macOS, there'll be a prompt asking you whether you'd like to enable Siri. Additionally, Siri can be enabled and disabled in the Siri section of System Preferences. There are several other options for Siri in System Preferences, including language, voice, voice feedback, mic input and customized keyboard shortcuts.

What Siri for Mac Can Do

Siri for Mac can do most of the same things Siri for iOS can do. It can give you sports scores or tell you about the weather. Schedule an event on your calendar, remind you what you need to get done today or find movie times. Here's a full list of the things that carry over to the Mac.

Siri has two new abilities that are built specifically to take advantage of the Mac:

Unlike Siri for iOS, Siri for Mac's dialogue box only takes up a portion of the screen. This allowed Apple to build Siri to be better utilized for multitasking. For example, Siri can be used to send a message to a friend while you're writing an email or working on a document. It can also find restaurant reservations for you while you're in the middle of a conversation with a friend.

Because Siri is built for multitasking on a Mac, some of its results are more interactive, allowing you to combine them with other apps. These are some of the things you can do with Siri's results in macOS Sierra.

Siri's Settings category is referred to as System Preferences to better match macOS' verbiage, but Siri can also do some things on a Mac that it can't do on an iPhone. These are new settings abilities Siri has gained:

Finally, there are some specific hardware requests that Siri can fulfill. In addition to asking Siri to turn up your volume or turn off your Bluetooth, Siri can tell you about your Mac.

All of Siri's Mac abilities can be used at any time. Siri will pause any audio or video you might have been playing when you activated it. This includes audio and video in your web browser, like SoundCloud tracks or YouTube videos.

Siri's dialogue box will also stay on your screen no matter where you are, whether on the desktop or in a full-screen app. It'll also stay in place as you navigate to different spaces. Siri can be deactivated by clicking the small "x" in the top right corner of its dialogue box.

SandboxGeneral
I don't understand why we can't just speak to the Mac for Siri to be activated. We can do this with Windows 10 by saying "Hey Cortanta" and not pressing any buttons or clicking anything.
Score: 6 Votes (Like | Disagree)

tardegrade
I'm impressed with the OS update but honestly Siri is just as hopeless on my Mac as it is on my iPhone. I gets roughly a third of requests right and then rarely interprets those requests correctly.

I've got a Moto G Android phone as well and comparing Siri to OK Google, which gets almost everything right first time and actually provides the desired results as well, is just a night and day difference.

It's shocking how far behind Apple are in this respect. Must try harder.
Score: 3 Votes (Like | Disagree)

I don't understand why we can't just speak to the Mac for Siri to be activated. We can do this with Windows 10 by saying "Hey Cortanta" and not pressing any buttons or clicking anything.

I posted instructions a long time ago: https://forums.macrumors.com/threads/how-to-enable-hey-siri-activation-on-a-mac-with-sierra.1983003/
Score: 3 Votes (Like | Disagree)

I played around with Siri last night. For some reason I cannot get her to launch applications. I have tried saying both "open" and "launch" with the name of the application, but every time she says "cannot find an application with that name, do you wish to search for it in the app store?" this is true for all apps, Apple's and third party apps. Has anyone else experienced this?

Article Link: How to Use Siri in macOS Sierra ('https://www.macrumors.com/how-to/macos-siri/')

I have the same problem, she tells me I don't have the app of that name and I should search the App Store! Other than set appointments and uselessly read out the Nikkei performance she seems incapable of anything useful. She won't search anything, can't find a file and is basically useless - she cannot interpret as well as the iPhone and won't place a FaceTime call, because I don't have the app according to her! Flawed is an understatement - useless is more like it.
Score: 1 Votes (Like | Disagree)
Read All Comments

5 hours ago by Joe Rossignol