Apple's newest crop of devices, the iPhone X, iPhone XS, iPhone XS Max, and iPhone XR don't have a Home button and feature new Side buttons with unique functionality, so Apple has introduced a new method for forcing a quick restart.

It takes a unique combination of button presses to cause your iPhone to restart, and while it's not immediately obvious, once you've learned the steps, a force restart is the quickest way to restart your iPhone if it's acting up. 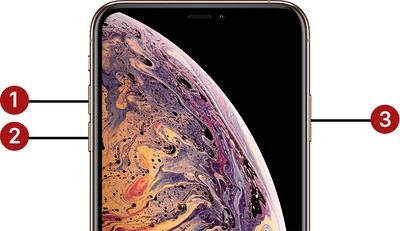 During this process, you will see a slider to power off the iPhone. You're going to want to ignore it and continue holding down the Side button until the screen goes black. At that point, the Apple logo will pop up, and after the restart is complete, the screen will activate once again.

Using the force restart process prevents you from having to shut the iPhone down entirely, which takes several more steps.

If you do want to shut the iPhone down, you can do so by going to the General section of the Settings app, scrolling down to the bottom, and choosing the Shut Down option.

You can also hold down the Volume Up button and the Side button at the same time to bring up the Emergency SOS interface that also houses a "slide to power off" option.

I’m trying to find another X to swap this one out at this point.

Since the SE, Apple has been increasingly losing its philosophy of ease of use (face recognition in front view instead of the nice fingerprint homebutton ready from anywhere, thus abandoning the central control element, at the same time screen size and thus increased weight for the Asian market, the ugly notch, roundings in the design at the expense of clear grip, etc.) due to differentiation pressure in the marketplace on an actually developed product.

No perfect product comes out of such a compromise matrix. Only an "optimal".

As an owner of a long line of iPhones, I can say that Face ID was a revelation in ease of use - it is so unintrusive that it may as well not be there - fingerprint sensors just aren’t in the same league. And the gesturing is so much more intuitive on these new phones - far better than the home button single/double/triple presses. The only thing they should fix IMO is to bring up notifications with a bottom left swipe and the control center with a bottom right swipe.
Score: 4 Votes (Like | Disagree)

Morgenland
Since the SE, Apple has been increasingly losing its philosophy of ease of use (face recognition in front view instead of the nice fingerprint homebutton ready from anywhere, thus abandoning the central control element, at the same time screen size and thus increased weight for the Asian market, the ugly notch, roundings in the design at the expense of clear grip, etc.) due to differentiation pressure in the marketplace on an actually developed product.

No perfect product comes out of such a compromise matrix. Only an "optimal".
Score: 4 Votes (Like | Disagree)

Does this button sequence also give you 100 extra lives?
Score: 1 Votes (Like | Disagree)
Read All Comments

Saturday November 21, 2020 10:00 am PST by Mitchel Broussard
In the lead-up to Black Friday next week, we've been putting a spotlight on the best deals coming from various retailers like Best Buy and Walmart. In an effort to further prepare our readers for the best Black Friday deals, we're breaking down what we think should be on your radar for Black Friday in 2020. Note: MacRumors is an affiliate partner with some of these vendors. When you click a...
Read Full Article • 58 comments

Friday November 20, 2020 11:57 am PST by Juli Clover
Following the release of the M1 Macs Apple executives have been doing interviews with a range of publications, and today, Ars Technica published another interview with software engineering chief Craig Federighi, hardware technologies lead Johny Srouji, and marketing VP Greg Joswiak. Much of the interview focuses on topics that the three have already covered in prior discussions, but there is ...
Read Full Article • 258 comments

Thursday November 19, 2020 10:16 am PST by Juli Clover
Apple today released iOS 14.2.1, a bug fix update that comes two weeks after the launch of iOS 14.2 and is available for Apple's new iPhone 12 models. The iOS 14.2.1 update can be downloaded for free and it is available on all eligible devices over-the-air in the Settings app. To access the new software, go to Settings > General > Software Update. According to Apple's release notes, iOS...
Read Full Article • 156 comments

Friday November 20, 2020 12:16 pm PST by Juli Clover
Apple today began selling the Leather Sleeve for the new iPhone 12 models, with the accessory having first been announced alongside the updated iPhones in October. Priced at $129, the Leather Sleeve is not a case and is designed to be removed when the iPhone is in use. It features a cutout at the front that displays the time, and it comes with a matching leather strap. According to Apple, it ...
Read Full Article • 186 comments

Thursday November 19, 2020 11:58 am PST by Juli Clover
Apple in iOS 14 is planning to introduce a new App Tracking Transparency feature that will let users know when companies want to track them across apps and website. Following outcry from developers like Facebook and ad networks unprepared for the change, Apple delayed the implementation of the anti-tracking functionality until early 2021. Eight civil society organizations recently sent a...
Read Full Article • 126 comments

Wednesday November 18, 2020 6:07 pm PST by Arnold Kim
Codeweavers posted a blog post and video tonight showing off CrossOver running on an Apple M1 MacBook Air. This video shows Team Fortress 2 running on a new M1 MacBook Air: CrossOver is software (based on Wine Project) that runs Microsoft Windows apps on the Mac by translating Windows APIs into their Mac equivalents. The Codeweavers team was able to run the current version of CrossOver on...
Read Full Article • 206 comments

Thursday November 19, 2020 6:12 pm PST by Juli Clover
Following the release of macOS Big Sur last week, a number of 2013 and 2014 MacBook Pro owners found that the update bricked their machines. Affected users saw their Macs get stuck displaying a black screen after attempting to install the new software. Apple has now addressed this issue in a new support document that provides instructions on what to do if macOS Big Sur can't be installed on...
Read Full Article • 87 comments

Friday November 20, 2020 5:15 am PST by Hartley Charlton
A new configuration of the M1 MacBook Air with 128GB of storage and a lower $799 price has today been spotted on Apple's U.S. Education Institution Hardware and Software Price List. The M1 MacBook Air is only available with 256GB, 512GB, 1TB, or 2TB of storage. There is currently no 128GB configuration on the Apple Store. However, Reddit user "u/dduci97" noticed that Apple has listed...
Read Full Article • 76 comments

Sonos Discounting Speakers, Sound Bars, and More for Black Friday (Up to $200 Off)