Apple today announced Apple One, a series of new subscription bundles that provide access to various Apple services at a combined monthly price. 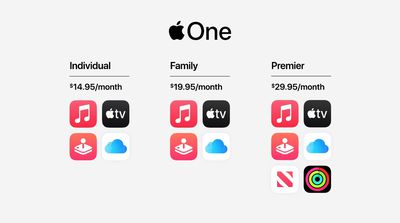 In response, Spotify sent out statements (via Peter Kafka) to the press decrying Apple's anti-competitive behavior and calling on "competition authorities" to stop Apple before it is able to cause "irreparable harm" to developers.

Once again, Apple is using its dominant position and unfair practices to disadvantage competitors and deprive consumers by favoring its own services. We call on competition authorities to act urgently to restrict Apple's anti-competitive behavior, which if left unchecked, will cause irreparable harm to the developer community and threaten our collective freedoms to listen, learn, create, and connect.

There are three separate ‌Apple One‌ plans that start at $14.95 per month. The standard plan includes Apple Music, Apple TV+, Apple Arcade, and 50GB of iCloud storage. Individually, these services would be priced at $21, so customers are saving $6 per month.

The Family ‌Apple One‌ plan includes ‌Apple Music‌, ‌Apple TV+‌, ‌Apple Arcade‌, and 200GB of ‌iCloud‌ storage for $19.95 per month, and all of the services can be shared among up to six family members. Individually, these services would be priced at $27.96.

The Premier ‌Apple One‌ plan, priced at $29.95 per month, includes ‌Apple Music‌, ‌Apple TV+‌, ‌Apple Arcade‌, Apple News+, Apple Fitness+, and 2TB of ‌iCloud‌ storage, which can be shared among up to six family members. The Premier plan offers the greatest savings as these services would be priced at $54.94 individually.

Lounge vibes 05
If this is anti-competitive, then so is Amazon prime, and so is Spotify. Spotify has several partners that get you free months, or free unlimited access to their premium subscriptions if you have a certain carrier, or you buy a certain vehicle, etc. How is this any different?
Maybe Spotify should partner with epic games and make some type of fortnight Spotify premium service.
Score: 88 Votes (Like | Disagree)

How is it different than something like Amazon Prime?

Yeah, I don’t really see the difference. I guess it’s fashionable to *try* and tear down Apple these days.
Score: 73 Votes (Like | Disagree)

G5isAlive
Too funny. You knew Spotify was getting jealous over the attention Epic was getting.
Score: 72 Votes (Like | Disagree)

Orizaba
2TB should be included in the family bundle...
Score: 61 Votes (Like | Disagree)

Nogi Memes
Apple One is very consumer friendly. There is no law that says Spotify needs to be coddled. They can develop their own smartphone and service bundle if they want.
Score: 55 Votes (Like | Disagree)
Read All Comments

Wednesday March 2, 2022 7:35 am PST by Mitchel Broussard
Flexibits this month is offering 75 percent off Flexibits Premium for new customers, including access to both Fantastical and Cardhop. This offer will run through March 31 on the Flexibits website, and the subscription supports apps across macOS, iOS, and iPadOS. Note: MacRumors is an affiliate partner with some of these vendors. When you click a link and make a purchase, we may receive a...
Read Full Article • 61 comments