Apple's iMac has been left with the M1 chip from over two years ago, despite the launch of ultra-fast new Mac models that contain newer technology. 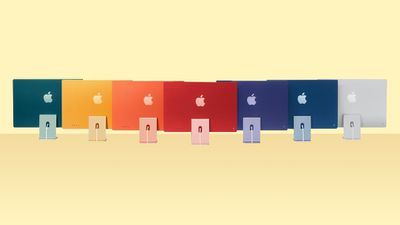 Apple introduced the 24-inch ‌‌iMac‌‌ in April last year, featuring a striking ultra-thin design in a range of color options. Though there is some contention around whether Apple will reintroduce a larger iMac model, the current model with a 24-inch display features the ‌M1‌ chip from November 2020 – meaning that it is outdated compared to the 13-inch MacBook Pro, redesigned MacBook Air, and iPad Pro. Apple announced the M2 chip in early June this year at WWDC, offering around 20 percent better performance, and since three different devices now contain the chip, the ‌iMac‌ is ripe for a chip upgrade. Even though adding an M2 chip to the ‌iMac‌ would presumably require limited internal changes, Apple has thus far neglected to do so and there are no signs of such a machine on the horizon.

Yet forecasts from Bloomberg's Mark Gurman suggest that an ‌iMac‌ with the ‌M2‌ chip is not on the horizon. Following the ‌M2‌ series of Macs, Gurman said a new ‌iMac‌ will be among the first Mac with M3 chips, which will include an updated 13-inch ‌MacBook Air‌, an all-new 15-inch ‌MacBook Air‌, and potentially a new 12-inch notebook that is "still in early development."

The ‌M3‌ chip is expected to be built on TSMC's 3nm technology, unlike the ‌M1‌ and ‌M2‌, which are fabricated using a 5nm process. The more advanced manufacturing process is expected to bring significant performance and efficiency improvements.

The device is believed to effectively be the successor to the current ‌M1‌ ‌iMac‌ and may not launch until late 2023 at the earliest, according to Gurman, meaning that it may yet be some time before a new ‌iMac‌ emerges. It is not clear why Apple would exclude the ‌iMac‌ from the ‌M2‌ chip and wait until the ‌M3‌ chip is available, especially since this means that the current ‌M1‌ model would be around for a considerable amount of time, already being over a year and a half old.

Apple is expected to announce new MacBook Pro models featuring the ‌M2‌ Pro and ‌M2‌ Max chips in a matter of months, which will become the most advanced Apple silicon chips to date. The launch of even more powerful Apple silicon hardware will only further highlight the extent to which the ‌iMac‌ seems to have been left behind.