A new report has revealed internal disagreement within Apple, causing some employees who work on the company's ads business to raise concerns that showing more ads to iPhone users ruins the premium experience that's been long offered to its customers, The Information reports. 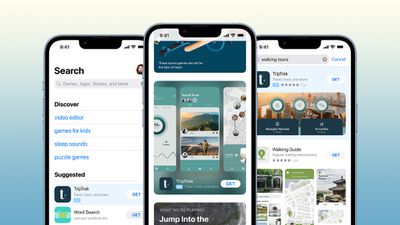 The lengthy report by The Information takes a deep dive into how Apple's ads team operates and internal concerns that the company's already growing ads business is going too far. According to the report, for example, Apple's ads salespeople are forbidden from using specific keywords when talking about the company's ads business. Salespeople should use "audience refinement" instead of saying "targeting," "platform" instead of "algorithm," and "competitor keywords" and "brand defenses" instead of "conquesting."

An Apple spokesperson, responding to the list of forbidden words, told The Information that the company wants employees to use language that is appropriate to Apple's offerings and that terms such as "targeting" do not apply since Apple doesn't let advertisers target specific users. Apple does not allow advertisers to target a demographic of less than 5,000 users to safeguard user privacy, according to the company.

While publicly, Apple displays a unified front on ads, especially those in the App Store meant to help developers gain more users and customers discover more apps, internally, employees are less than satisfied with the current approach. In internal chatrooms, at least seven employees who worked on Apple's ads team voiced concerns that the company is going too far in its ads business and will damage the premium experience of using an ‌iPhone‌. The report reveals that in 2018, Apple had plans to show users ads in Spotlight search on iOS, but it was reportedly abandoned after possible internal backlash.

Some managers within Apple's ads department previously pushed salespeople to pitch ad opportunities to different companies using keywords that were less relevant to their apps but that were less expensive than other keywords, according to the report. The requests from managers often made salespeople uncomfortable, adding to the fact that Apple's ads team did not have access to contact information or financial details about developers on the ‌App Store‌, alienating them further.

In the last few weeks, developers, customers, and critics of Apple have all voiced disapproval of the company's plans to expand its ads footprint in the App Store. Reports also suggest Apple plans to introduce ads in Apple Maps and Apple TV+. Even with the expansion in ads, Apple has no ambition to grow its ads business to the size of Meta or Google, according to a person familiar with the matter cited by the report.

But inside Apple there doesn't currently seem to be much appetite for goals that big. One person familiar with Apple's ad business said the company doesn’t harbor ambitions to compete at the same level as Meta and Google in digital advertising, nor does it plan to build an advertising network similar to those of its rivals that would serve ads to users outside its own apps and services. The person said ad executives are pleased with revenue growth based on Apple's existing ad spots and don’t plan to significantly increase the number of ads on iPhones to meet growth targets.

In the meantime, Apple has paused ads on the App Store for specific categories after a botched roll-out last month, and the company has not formalized plans to expand ads into other services. According to Bloomberg's Mark Gurman, Apple's advertising chief Todd Teresi wants to more than double Apple's current revenue from its ads business to $10 billion annually, up from the current $4 billion.

LeeW
I mean a longstanding view held by many Apple users is paying a premium for the lack of ads. It's not a step in the right direction.
Score: 89 Votes (Like | Disagree)

A new report has revealed internal disagreement within Apple, causing some employees who work on the company's ads business to raise concerns that showing more ads to iPhone users ruins the premium experience that's been long offered to its customers, The Information ('https://www.theinformation.com/articles/inside-apples-love-hate-relationship-with-its-4-billion-ads-business?rc=583sff') reports.

That’s good news, as I can’t stand ads. I don’t mind the occasional email from Apple pitching their services, but placing ads in the new weather app for example is just wrong.
Score: 73 Votes (Like | Disagree)

t0rqx
Does not take a genius to figure that out. No ambition to grow as META or Google? Money is driving the company now. This is Sculley 2.0 and we all know how that went.
Score: 48 Votes (Like | Disagree)

singularity0993
Incredibly shortsighted decision. Can’t believe the most valuable company in the world is still aiming for fast money.
Score: 42 Votes (Like | Disagree)

thosmatthews
More ads that were intrinsic to the OS would be one of the few things to lever me out of the Apple ecosystem.
Score: 41 Votes (Like | Disagree)

ashdelacroix
There should be zero ads on a platform sold to us as being the very opposite of the revenue model used by the likes of Google and Facebook. Apple needs to be reminded of its core values. Apple is now fully in the grip of the operations division rather than the design division. No wonder the design team is losing people. Jony Ive's departure is making more and more sense.
Score: 36 Votes (Like | Disagree)
Read All Comments