The launch of a new iPad Pro and entry-level iPad means that Apple's ‌iPad‌ lineup is the largest it has been in recent memory. The wide range of choices, inconsistent features, and confusing compatibility with accessories may be a source of confusion for customers looking for a new ‌iPad‌. 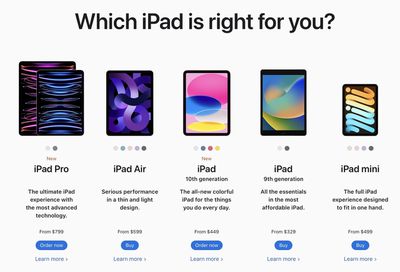 One of the newest additions to the ‌iPad‌ lineup is the 10th-generation entry-level ‌iPad‌. Compared to the ninth-generation model, which remains in the lineup at a lower starting price, it's a major update featuring a new design and a USB-C port. The new ‌iPad‌, however, is eerily similar to the fifth-generation iPad Air.

Both the latest ‌iPad Air‌ and entry-level ‌iPad‌ have the same full-screen design with no Home Button, a Touch ID sensor embedded in the Power button, a 10.9-inch display, a single camera system, and support for 5G. The two iPads are extremely similar, with the only difference being the lack of support for the second-generation Apple Pencil on the entry-level ‌iPad‌, minor changes in the displays, and the chip.

The latest ‌iPad Air‌ has the M1 Apple silicon chip, while the new entry-level ‌iPad‌ is powered by the A14 Bionic chip. While the ‌M1‌ chip is more powerful than the A14 Bionic, customers are unlikely to see major differences in day-to-day use. With iPadOS 16, however, there are some ways the ‌M1‌ chip will enable newer experiences not available on the entry-level ‌iPad‌, most notably Stage Manager.

Other than the ‌iPad Air‌ and entry-level ‌iPad‌, customers can still choose the ninth-generation baseline ‌iPad‌ as an option. The ninth-generation ‌iPad‌ features a Home Button, a smaller 10.2-inch display, the A13 Bionic chip, and a Lightning connector. Between the three ‌iPad‌ models, customers are left to choose between differences in performance, design, and compatibility for ‌Apple Pencil‌.

At the higher end of the lineup, customers can choose the new ‌iPad Pro‌, now powered by the M2 Apple silicon chip. The ‌iPad Pro‌ is offered in 11-inch and 12.9-inch sizes and is the only ‌iPad‌ model with advanced features like ProMotion, a LiDAR scanner, a USB‑C connector with support for Thunderbolt, and Face ID. The iPad mini is also an option for customers who solely want the smallest and most portable ‌iPad‌ possible.

Tim needs one of these
Score: 120 Votes (Like | Disagree)

TheYayAreaLiving ?
It’s confusing, too expensive and not worth the upgrade this year point blank period

CheesePuff
It's been a confusing lineup for years - even the iPad Pro you have no idea that the 12.9" model has a much better display than the 11".

This is what Jobs did when he returned in 1997 and saw the plethora of same Macintosh models that their product managers couldn't tell him why they existed or what differentiated each one, so he scrapped them all and went with what we knew for years, one consumer and one professional laptop model and one consumer and one professional desktop model

DMG35
Confusing because the lineup is a complete mess.
Score: 71 Votes (Like | Disagree)
Read All Comments