An Apple Watch Ultra user has modified their new device's casing to add a brushed finish and remove the orange color of the Action Button in an effort to make it more visually appealing. 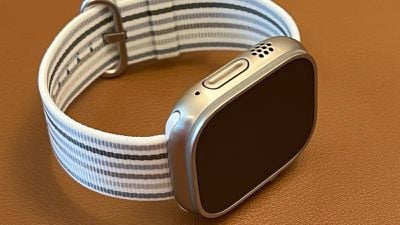 The ‌Apple Watch Ultra‌ offers the first complete redesign of the Apple Watch since the product line's announcement in 2014, and while the design has been met with praise from many users, some have criticized the size of the device and its bold new look. In a thread on the MacRumors forums, user "perezr10" gave their take on the ‌Apple Watch Ultra‌'s design:

First, I think there is nothing wrong with the way the Ultra looks for its intended market. Rugged sport watches should look like this. And they pretty much all do. The things I dislike about the Ultra have practical reasons for being. I used to wear a humongous Garmin sport watch for running.

BUT… I was never wanting to wear my Garmin to work or out on a date. And I don't think I'll ever want to wear this Ultra whenever I'm dressing up either.

There are five things I hate about the design when I consider wearing it as a normal everyday watch. The "tallness," the hunchback which is the crown guard, the holes everywhere, the orange button, and the finish which looked like Starlight aluminum. There is nothing that can be done about the first three but the last two are solvable.

The user then proceeded to give the ‌Apple Watch Ultra‌'s entire titanium casing a brushed finish using a coarse abrasive finishing buff, moving away from the uniform sandblasted effect of the original device.

"It may not be to everyone's liking, but I gotta say, I'm really liking my Ultra more after this. I still won't ever wear it with a suit, but I'm more likely now to use it when going out and about in town in jeans," perezr10 added.

Respect that others people's tastes differ from mine, though.

I also wear orange pants for our "nights out on the town" so take that for what its worth.
Score: 30 Votes (Like | Disagree)

sniffies
Kudos to him.

But I like my Watch just the way Apple designed it. Beautiful design is one of the many reasons I bought it in the first place.
Score: 27 Votes (Like | Disagree)

DMG35
I prefer the original design.

Nice work by the modder though.
Score: 19 Votes (Like | Disagree)

CharlesShaw
I suppose it’s better to have a watch you like than one that Apple would repair under warranty.
Score: 18 Votes (Like | Disagree)

Friday September 23, 2022 12:26 pm PDT by Juli Clover
It's the official launch day for Apple's latest and greatest product, the Apple Watch Ultra. We picked up one of the new watches to check out the features and compare it with the Apple Watch Series 8 to see if it's worth the upgrade. Subscribe to the MacRumors YouTube channel for more videos. The Apple Watch Ultra is Apple's largest watch to date, measuring in at 49mm, a full 4mm over the...
Read Full Article • 195 comments

Sunday September 25, 2022 2:27 pm PDT by Sami Fathi
A YouTuber has put Apple's claims for the durability of the Apple Watch Ultra to the test by putting it up against a drop test, a jar of nails, and repeated hits with a hammer to test the sapphire crystal protecting the display. TechRax, a channel popular for testing the durability of products, first tested the Apple Watch Ultra by dropping it from around four feet high. The Apple Watch...
Read Full Article • 198 comments

Monday November 28, 2022 10:28 am PST by Joe Rossignol
Ahead of the Oceanic+ app launching on the Apple Watch Ultra today, a few individuals received some early hands-on time with a beta version of the app. Designed by Huish Outdoors in collaboration with Apple, the app allows the Apple Watch Ultra to be used as a dive computer for recreational scuba diving at depths up to 40 meters/130 feet. Image Credit: TechCrunch For those unaware, rising to ...
Read Full Article • 26 comments

Wednesday September 21, 2022 2:54 am PDT by Tim Hardwick
Apple has listed two new apps on the App Store that are made exclusively for the Apple Watch Ultra: "Siren" and "Depth." Siren is designed for emergency situations if users become lost or injured to draw attention to their location. When the Action button on Apple Watch Ultra is long-pressed, Siren emits a unique 86-decibel sound pattern which can be heard up to 600 feet (180 meters) away. ...
Read Full Article • 27 comments

Saturday December 3, 2022 10:23 am PST by Joe Rossignol
iPhone 12 Pro and Pro Max, iPhone 13 Pro and Pro Max, and iPhone 14 Pro and Pro Max models feature a LiDAR Scanner next to the rear camera that can be used to measure a person's height instantly in Apple's preinstalled Measure app. To measure a person's height, simply open the Measure app, point your iPhone at the person you want to measure, and make sure they are visible on the screen from...
Read Full Article • 87 comments