This week brought some shocking news for iOS 16 beta testers, with Apple bringing back the iPhone battery percentage to the status bar after a number of years. 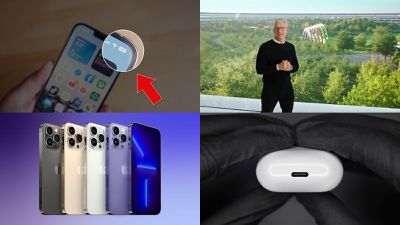 Other news and rumors this week included word that Apple has started recording portions of its media event planned for next month to introduce the iPhone 14 and Apple Watch Series 8, claims about iPhone 14 Pro pricing and Apple's plans for switching AirPods over to USB-C charging, and more, so read on for all the details on these stories and more!

The new battery icon is available on most iPhone models with a notch. The battery percentage appears within the battery icon to save space, but not everyone is a fan of this design.

Check out our list of everything new in iOS 16 beta 5 for other new features and changes in the beta. Apple also released new betas for iPadOS 16, macOS Ventura, watchOS 9, and tvOS 16.

It appears that Apple's annual iPhone event won't be a fully in-person event again this year, as Bloomberg's Mark Gurman this week claimed that Apple has started to produce a pre-recorded video for the event. It's possible that Apple will still invite media to the event for in-person hands-on demos with new products.

Unsurprisingly, Apple will likely unveil its iPhone 14 and Apple Watch Series 8 product lineups at the September event, and at least five other products are expected to be announced this year.

Apple plans to increase the prices of iPhone 14 Pro models compared to iPhone 13 Pro models, according to analyst Ming-Chi Kuo.

The next-generation iPad Pro will feature the same design as the current model, but with two new four-pin connectors on the top and bottom, according to a report from Japanese website Mac Otakara.

Apple is expected to release new 11-inch and 12.9-inch iPad Pro models with M2 chips and support for MagSafe wireless charging later this year — possibly alongside the delayed release of iPadOS 16 in October.

USB-C AirPods Expected to Launch in 2023

Apple plans to switch to USB-C charging cases for all AirPods models in 2023, but the second-generation AirPods Pro launching later this year may still have a Lightning charging case, according to a recent tweet from analyst Ming-Chi Kuo.

Kuo also expects the iPhone 15 to switch to USB-C in 2023, along with several accessories, such as the MagSafe Battery Pack and the Magic Mouse.

Google's Android team has launched a new "Get the Message" website that again calls on Apple to adopt Rich Communication Services (RCS) alongside iMessage in the Messages app on iPhone.

Google has been pushing Apple to switch from SMS to RCS for months now, with no response from Apple. RCS would allow for read receipts, audio messages, and more for conversations between iPhones and Android smartphones.

alexe
You know much the innovation around the iPhone has slowed down when a new battery status icon is one of the most discussed topics ?
Score: 19 Votes (Like | Disagree)

Akzel
The slow death of the lightning connector is too slow. USB-C all the things ASAP.
Score: 13 Votes (Like | Disagree)

USBC is delicate trash and harder to align than lightning.

I would honestly like to see what you are doing with the USB-C connector having these issues...
Score: 5 Votes (Like | Disagree)

You know much the innovation around the iPhone has slowed down when a new battery status icon is one of the most discussed topics ?

Apple has taken on Tim’s slow, methodical, risk-averse personality and it shows. It takes years for people’s perception of things to change, and I think people are finally starting realize that Apple is no longer the innovative force they were under Jobs, but rather, what’s known in the industry as a slow follower.
Score: 4 Votes (Like | Disagree)

iDarth_Betar
So… rinse and repeat
Score: 4 Votes (Like | Disagree)
Read All Comments

Friday September 30, 2022 12:51 pm PDT by Juli Clover
Apple CEO Tim Cook has been touring Europe this week, sitting down for interviews with various media publications. Augmented reality has been a running theme in Cook's discussions, and it is a topic he brought up again in an interview with Dutch publication Bright, which is part of RTL News. "I think AR is a profound technology that will affect everything," Cook said, echoing comments from...
Read Full Article • 280 comments

Sunday October 2, 2022 6:41 am PDT by Joe Rossignol
Apple is developing new iPad Pro, Mac, and Apple TV models, and at least some of these products will be released in October, according to Bloomberg's Mark Gurman. However, Gurman continues to believe that Apple is unlikely to hold an event this month. In the latest edition of his Power On newsletter, Gurman said "the big iPhone 14 unveiling last month was probably it for Apple in 2022 in...
Read Full Article • 154 comments