In the latest iOS 16 beta, Apple has updated the status bar battery icon on iPhones with Face ID to display the exact percentage remaining rather than just a visual representation of battery level, and while the change has been largely welcomed, some users are unhappy with the way it has been implemented. 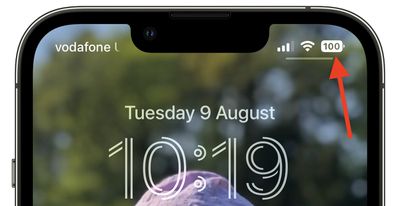 In iOS 15 and earlier, battery percent has not been present on iPhones that have ‌Face ID‌ because of the lack of space on either side of the notch that houses the TrueDepth camera hardware. The new design adds the specific battery level to the battery icon, providing a better idea of battery status at a glance.

Apple appears to have chosen this abrupt change in styling to ensure that the central percentage number remains legible as the battery level depletes – if a white bar depleted behind the number then it would be harder to make out at a glance, Apple's UI designers likely concluded.

Some users disagree with this approach, while others have suggested their own alternative designs for a battery status indicator with percentage level.

The new iOS battery percentage feature is a bit confusing. It’ll take time to get used to it. Seeing a filled battery icon with the numbers and half of the battery are two different understandings of how much battery is left. pic.twitter.com/eSA9ppiQv8 — Rokas (@samuolisr) August 9, 2022

Nothing wrong with what Apple released but I think I might’ve preferred something like Alternative A for the battery indicator pic.twitter.com/a44879RIFk — Mikael Johansson (@michaelnevernot) August 10, 2022

Perhaps Apple didn't anticipate that such a small design change would be so controversial, or that some users have a very clear idea of how they want their iPhone's battery level to be represented.

For some, it's simply a case of calling out what they consider to be poorly thought-out UI design. For others, it plays into low-battery anxiety, a major trigger of nomophobia. Either way, it's become a surprisingly heated topic, while it's easy to forget that the percentage display is optional (caveat: It's enforced when in Low Power Mode.)

Of course, the battery level indicator design isn't set in stone, and Apple well could change it in a later beta of iOS 16 or the final release. Whether you're testing the latest public beta or not, what do you think about the way it's been implemented? Let us know in the comments.

fwmireault
It’s silly to complain about such a minor thing. Design could probably be better, but I’m just happy that this feature is avaible again.
Score: 30 Votes (Like | Disagree)

Stridr69
Talk about a first world problem. Personally I've gotten used to the current version so don't really care at all about what percentage of battery is left. William Shakespeare's play comes to mind here: "Much Ado about Nothing"
Score: 25 Votes (Like | Disagree)

rdinterman
Seriously people, get a grip. It’s fine the way it is, just happy it’s back. Toggle it off of you don’t like it.
Score: 22 Votes (Like | Disagree)

Starscape
A fantastic example of people looking for something to complain about.
Score: 21 Votes (Like | Disagree)

Sposborn
It sounds like quite a few people on the internet need a hobby... It's a battery icon....
Score: 18 Votes (Like | Disagree)
Read All Comments

Monday August 8, 2022 10:43 am PDT by Juli Clover
With the fifth beta of iOS 16, Apple has updated the battery icon on iPhones with Face ID to display the specific battery percentage rather than just a visual representation of battery level. The new battery indicator is available on iPhone 12 and iPhone 13 models, with the exception of the 5.4-inch iPhone 12/13 mini. It is also available on the iPhone 11 Pro and Pro Max, XS and XS Max, and...
Read Full Article • 361 comments

Tuesday September 20, 2022 10:53 am PDT by Juli Clover
Apple today released the second beta of iOS 16.1, introducing further tweaks to the battery percentage indicator that is located in the status bar. With today's beta, the battery level of the icon depletes as the battery depletes, providing a better visual indication of what battery level is at alongside the percentage. If the percentage feature is enabled, you will now see the charge...
Read Full Article • 111 comments

Tuesday September 13, 2022 1:00 am PDT by Sami Fathi
Following iOS 16's public release, Apple has confirmed that users of older generation iPhone models will miss out on the ability to show their iPhone's battery percentage directly in the status bar. In an updated support document, Apple says that the new battery percentage display is not available on the iPhone XR, iPhone 11, the iPhone 12 mini, and the iPhone 13 mini. Apple provides no...
Read Full Article • 132 comments

Monday August 15, 2022 1:56 pm PDT by Juli Clover
The sixth beta of iOS 16 that was provided to developers and public beta testers today focuses mainly on bug fixes and other under-the-hood improvements, but it does make one small change to the battery percentage status bar feature that was introduced in the prior beta. When using Low Power mode, it is now possible to turn off the percentage indicator that is shown in the status bar,...
Read Full Article • 54 comments

Tuesday September 20, 2022 12:17 pm PDT by Juli Clover
Apple today released the second beta of iOS 16.1, introducing some notable changes to charging indicators on the iPhone and also fixing a few bugs. We've rounded up all of the changes in the second beta below. Battery Status Bar Visual Charge Indicator Apple in iOS 16 added battery percentage to the battery icon in the status bar on Face ID iPhones, and in iOS 16.1 beta 2, improved the...
Read Full Article • 96 comments

Thursday July 21, 2022 5:15 am PDT by Tim Hardwick
In iOS 15.6 and the latest iOS 16 beta, Apple appears to have intentionally removed the AirTag battery indicator in the Find My app. In previous versions of iOS, a small battery icon, similar to the iPhone battery status, appears below an AirTag's name and location when the AirTag card is opened in Find My. While not accompanied by a percentage, the icon provided an approximate...
Read Full Article • 207 comments

Wednesday September 14, 2022 11:12 am PDT by Juli Clover
Apple in iOS 16 updated the battery icon on iPhones with Face ID to display the specific battery percentage rather than just a visual representation of battery level. At launch, this feature did not include the iPhone 13 mini, iPhone 12 mini, iPhone XR, or iPhone 11, but according to multiple reports from the MacRumors forums and Twitter, all of these iPhones now support the feature....
Read Full Article • 131 comments