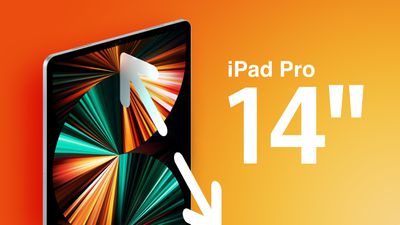 On Twitter, Young claimed that this larger ‌iPad Pro‌ model will feature a mini-LED display and ProMotion like the current 12.9-inch ‌iPad Pro‌:

Confirmed the 14.1" iPad Pro is being developed with our supply chain sources. It will have MiniLEDs and ProMotion. Not sure of the timing, but early 2023 may be more likely. — Ross Young (@DSCCRoss) June 9, 2022

The rumor was first shared yesterday by the hit-and-miss Twitter leaker known as "Majin Bu," who said that Apple is developing a 14.1-inch ‌iPad Pro‌ model with the M2 chip, configured with 512GB of storage and 16GB of memory as standard:

Majin Bu also mentioned other upcoming ‌iPad Pro‌ models, saying that "no major changes" are expected for the 11-inch model, while the 12.9-inch model may feature slimmer bezels around the display. As mentioned by Majin Bu, new iPadOS 16 features such as Stage Manager and Display Zoom suggest that there is a clearer use case for an ‌‌iPad Pro‌‌ with an even larger display.

Young now seems to have supported Majin Bu's rumor about the existence of a 14.1-inch ‌iPad Pro‌. Young has revealed a wide range of accurate insights into Apple's plans, such as the iPhone 13 Pro's ProMotion display, the display size and bezels of the sixth-generation iPad mini, the 14- and 16-inch MacBook Pro's mini-LED displays with ProMotion, the ‌M2‌ MacBook Air's display size, and more, so his comments are worth taking seriously.

While Majin Bu suggested that new ‌iPad Pro‌ models could be unveiled at an Apple event in October or November this year, Young was unsure of launch timing, saying that early 2023 "may be more likely."

The first report about even larger ‌iPad Pro‌ models came from Bloomberg's Mark Gurman last year. In the first edition of his "Power On" newsletter, Gurman said Apple was exploring iPads with larger displays:

The latest rumor about a 14.1-inch ‌iPad Pro‌ from Majin Bu and Young, in addition to Gurman's previous comments, suggest that an even larger ‌iPad Pro‌ model is more likely to emerge than previously thought and could arrive sooner rather than later. More immediately, Apple is expected to launch new ‌iPad Pro‌ models with wireless charging.

Apple Knowledge Navigator
You think this is gonna be expensive, wait till you see the magic keyboard Tim’s got for ya
Score: 65 Votes (Like | Disagree)

LanderMaan
I'm sure this means iPadOS will become multi-user, because you'll need at least two people to carry this thing around.
Score: 25 Votes (Like | Disagree)

Unless it comes with Finder or a Finder like easy to navigate filesystem, what exactly is the point?

Not everyone uses an iPad to sit in Finder. I use mine everyday for sketches with the Apple Pencil. I would really enjoy having a larger screen.
Score: 21 Votes (Like | Disagree)

TheYayAreaLiving ?
Wow! A massive iPad Display. I will instantly buy this. Guess I won't be buying a new iPad Pro this year. Thanks, Mr. Young.
Score: 18 Votes (Like | Disagree)

dlewis23
I am so interested in this. Would be purchasing on day one.
Score: 17 Votes (Like | Disagree)