In the first edition of his new Power On newsletter for Bloomberg, Mark Gurman said Apple is exploring future iPads with larger displays, although he added that a potential release is likely at least a few years away if ever. 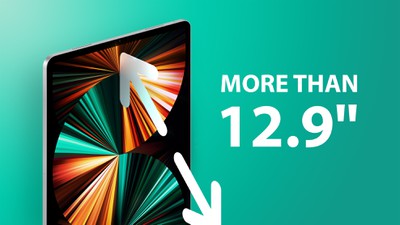 An excerpt from Gurman's newsletter, which also covers some reshuffling of the Apple Car team, Peloton working on a heart rate monitor, and more:

The current iPad Pro comes in 11-inch and 12.9-inch display sizes. In a previous Bloomberg report, Gurman and Debby Wu said Apple is testing a new iPad Pro with a glass back that would support wireless charging for release in 2022.

Larger display sizes would help further blur the lines between the iPad Pro and the MacBook Pro, which is available with up to a 16-inch display. However, many customers still believe iPadOS does not take full advantage of the iPad Pro's hardware, and Gurman opined that Apple ultimately needs to allow Mac apps and Mac-like multitasking with more flexible arrangements of app windows on the iPad Pro.

Apple last updated the iPad Pro in April with its custom-designed M1 chip, Thunderbolt support, 5G connectivity on cellular models, a mini-LED display on the 12.9-inch model, up to 2TB of storage, up to 16GB of RAM, and more.

sunny5
I am not interested as long as it has iPadOS. iPadOS itself is limiting the potential power. Why not macOS then? Apple keep saying that iPad can replace laptop and yet it never did since the beginning.
Score: 42 Votes (Like | Disagree)

velocityg4
How about one's which run in 24 and 30 inch flavors. That run macOS instead of iPad OS. Mounted on a large base which allow a wide range of tilts all the way to full horizontal. Making for a great competitor for the Surface Studio.

Also with a 500W battery. So, it can be used as a luggable device. Also charged at night and used full wireless for people obsessed with no wires at their desk.

citysnaps
I suspect Apple has been exploring and making dozens of engineering prototypes of various sized iPads, including some very large, since the beginning.
Score: 24 Votes (Like | Disagree)

Stridr69
I wonder if Apple eventually goes the Windows Surface route. Sure seems that way.
Score: 21 Votes (Like | Disagree)

dlewis23
I am all for this. I would love an iPad with a larger display. 14 - 16in I'm all in, I use mine daily for drawing so the bigger the better.
Score: 16 Votes (Like | Disagree)
Read All Comments

Tuesday July 13, 2021 7:54 am PDT by Hartley Charlton
The airline JetBlue has today announced that it will be equipping its pilots with the M1 iPad Pro. JetBlue was one of the first airlines in the United States to adopt digital documentation in the cockpit. The airline first received Federal Aviation Administration approval to give iPads to all pilots in 2013, which enabled pilots to use the iPad for operational tracking apps, hosting system...
Read Full Article • 45 comments

Monday July 12, 2021 2:24 am PDT by Tim Hardwick
A larger redesigned, Apple silicon-powered iMac to replace the current 27-inch Intel model is still "en route," according to Bloomberg journalist Mark Gurman. Writing in the latest instalment of his Power On newsletter, Gurman says the fact that Apple recently increased the screen size for the smaller iMac from 21.5 to 24 inches suggests to him that the 27-inch model could see an equivalent...
Read Full Article • 206 comments

Sunday July 18, 2021 7:39 am PDT by Sami Fathi
Apple can be expected to release its redesigned 14-inch and 16-inch MacBook Pros sometime between September and November, as part of another packed fall season for new product launches, according to Bloomberg journalist Mark Gurman. In the latest edition of his Power On newsletter, Gurman says that the new MacBook Pros will go into production in the third quarter and can be expected to be...
Read Full Article • 171 comments

Thursday July 22, 2021 6:53 am PDT by Mitchel Broussard
Today we're tracking a discount on the 11-inch 128GB Wi-Fi iPad Pro from 2021, priced at $749.00, down from $799.00. Sold by Amazon, this tablet is available in both Silver and Space Gray at this $50 discount price. Note: MacRumors is an affiliate partner with Amazon. When you click a link and make a purchase, we may receive a small payment, which helps us keep the site running....
Read Full Article • 6 comments