Apple's 33rd Worldwide Developers Conference officially kicks off on Monday at 10:00 a.m. Pacific Time with a keynote where the company will reveal iOS 16, iPadOS 16, macOS 13, watchOS 9, tvOS 16, and possibly some new hardware. 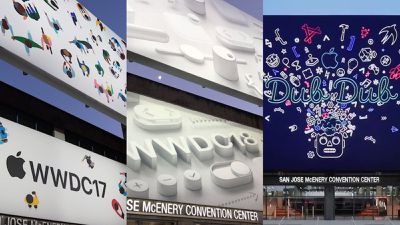 While WWDC is a software-heavy event, Apple has previewed and announced hardware during the conference in past years. Ahead of this year's conference and amid rumors of a possible Mac-focused announcement on Monday, we thought it'd be fun to take a trip down memory lane and relive some of Apple's biggest hardware news at WWDC.

To kick this list off, we'll start at WWDC 2017, where Apple announced and previewed a host of new and updated products. The most notable announcement at that WWDC was the HomePod, a now-discontinued smart speaker that struggled to gain momentum.

The second most notable was the preview of the all-new iMac Pro, an also now-discontinued product that was a 27-inch high-end iMac that Apple hoped would cater to the needs of professional customers. The iMac Pro retained the same design as the standard 27-inch iMac, also now discontinued, but in a "badass space gray finish."

While Apple announced the iMac Pro in June, it didn't begin shipping to customers until December. Apple also gave its lineup of MacBooks a spec bump with Intel's Kaby Lake processors. Apple also refreshed the 21.5-inch and 27-inch iMacs, now both discontinued, with brighter displays, faster storage, and performance.

Outside the Mac and the HomePod, Apple replaced the 9.7-inch iPad Pro with an all-new 10.5-inch model and a redesigned 12.9-inch design. Both iPads were the first to feature Apple's ProMotion technology which has since expanded to the iPhone and MacBook Pro.

Following a jam-packed hardware WWDC a year before, at WWDC 2018, Tim Cook seemingly intentionally kicked the conference right off by dismissing any hope that the event will include any hardware announcements. "Today is all about software, and we've got some very exciting updates," Cook said.

The Pro Display XDR and the Mac Pro were made available to customers later that year. Apple likely decided to preview both new products at WWDC since they targeted professional customers, not mainstream consumers.

At WWDC 2020, Apple didn't explicitly announce a new hardware product, but it did announce a major change for the Mac: it would be moving to Apple silicon. Intel processors had powered the Mac since 2005, and Apple announced its transition away from Intel during the conference.

As part of the transition announcement, Apple gave select developers access to Developer Transition Kits, including a Mac mini outfitted with an A12Z chip. The Mac mini helped developers prepare their apps for the Apple silicon architecture. The first Apple silicon Mac would not get announced until November, but the announcement at WWDC paved the way for the next generation of Mac hardware.

Other than a relatively significant number of changes and new features coming to iOS, iPadOS, macOS, watchOS, and tvOS, we don't know what Apple has in store for WWDC 2022. Bloomberg's Mark Gurman has cast doubt that Apple will showcase its long-rumored AR/VR headset on Monday. Instead, Gurman believes that if any hardware announcement occurs, it's likely to be a redesigned MacBook Air.

Apple teased the release of an Apple silicon Mac Pro during its last event in March, and it remains unclear when a high-end Apple silicon Mac could launch. Given that Apple previewed a Mac Pro and Pro Display XDR at WWDC 2019, one could assume we could hear some news about a new Mac Pro on Monday, but only time will tell.

Apple plans to live stream the WWDC keynote on its website, the ‌Apple TV‌ app, and YouTube, but for those unable to watch, we'll be covering the event on MacRumors.com and through the MacRumorsLive Twitter account.

We'll also have in-depth coverage of all of Apple's announcements throughout the rest of the week and going forward as we test the new software.

TheYayAreaLiving ?
Remembering the golden era. WWDC, 2012. Introduction of Macbook Pro 15" w/ retina display. How can you not be overblown by this?

Bring out the colorful MacBook Air. ?
Score: 19 Votes (Like | Disagree)

mnsportsgeek
Thank you for sticking a fork in the "Apple doesn't announce hardware at WWDC" mouth breathers.
Score: 17 Votes (Like | Disagree)

theROZ
Are these the new AR glasses?

Looking back, when the iPhone 4 was announced in WWDC after that huge Gizmodo leak.

That was like the prime time. Historic Era! So glad, I was old enough to witness all that drama.
Score: 9 Votes (Like | Disagree)

That would finish up the transition to Apple Silicone within the 2 year cycle they promised.

jav6454
Looking back, when the iPhone 4 was announced in WWDC after that huge Gizmodo leak.
Score: 6 Votes (Like | Disagree)
Read All Comments