Apple Unveils $349 HomePod Smart Speaker to be Available in December

Apple today announced its plans to "reinvent home music" with the unveiling of its newest product, HomePod, a wireless speaker powered by Apple's A8 chip with Siri integration that's just under 7 inches tall. 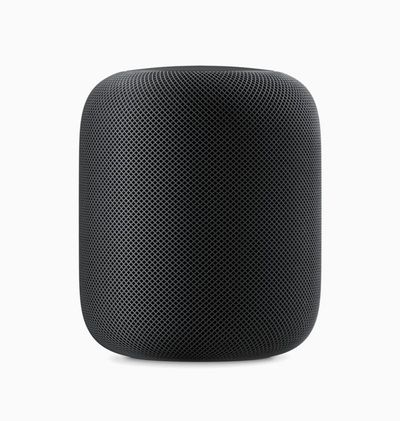 Apple reinvented portable music with iPod and now HomePod will reinvent how we enjoy music wirelessly throughout our homes,” said Philip Schiller, Apple’s senior vice president of Worldwide Marketing. “HomePod packs powerful speaker technology, Siri intelligence and wireless access to the entire Apple Music library into a beautiful speaker that is less than 7 inches tall, can rock most any room with distortion free music and be a helpful assistant around your home.

HomePod is a combination of high quality music playback speakers and smart speaker systems that are on the market today. The HomePod can intelligently detect the space it is in with "spatial awareness," which the company said provides better quality audio playback than its competitors.

HomePod has an upward-facing woofer and an array of seven beam-forming tweeters. It has a six-microphone array that can detect commands even when music is playing loudly. When there are two HomePods in a room, they will automatically detect each other and optimize music playback complementarily. Setting up a new HomePod works similarly to AirPods set up--simply holding an iPhone near a HomePod will pair it.


HomePod automatically works with an Apple Music subscription and can play back playlists, radio stations, and more content found within Apple Music. Siri commands will let users direct the HomePod to play music, add songs to playlists, and even answer music trivia questions.

Siri will also act as a home assistant and include support for News, Messages, Podcasts, Stocks, Weather, Reminders, alarms, timers, sports and traffic. HomePod will also be a HomeKit hub and let users control lights, blinds, locks, and other accessories by voice, even when users are away from home.

The HomePod will launch in December for $349 and will be available in white and space gray in the US, UK, and Australia to start.

B60boy
There smoking something at Apple. This is a miss. Too high price for what you get. Disappointing.
Score: 53 Votes (Like | Disagree)

sunapple
First comments here seem to be missing the whole Wi-Fi speaker point. This replaces both Sonos and an Echo, which makes 349$ not a bad price actually. I imagine a lot of people who don't have decent audio, but do use Apple Music who would want a speaker like this.

Siri makes for a great addition to listening audio, at least when I compare it to the somewhat cumbersome way of playing music through my regular wired speakers from my Mac like I do now. I'd love to try one out, shame it's going to be another 6+ months or so.
Score: 28 Votes (Like | Disagree)

v0lume4
The Mac Pro trash can design repurposed as a smart speaker is a funny analogy to the state of the Mac Pro.
Score: 27 Votes (Like | Disagree)

Same - I was telling myself $200 was the highest and would compete strongly with Alexa. But this is wayyy to expensive for a 1st generation product, especially as Siri is still half broken.
Score: 23 Votes (Like | Disagree)

Sunday February 5, 2023 6:07 am PST by Joe Rossignol
Apple has discussed selling a new top-of-the-line iPhone alongside the Pro and Pro Max models in 2024 at the earliest, according to Bloomberg's Mark Gurman. Based on this timeframe, the device would be part of the iPhone 16 lineup or later. In a September 2022 edition of his weekly "Power On" newsletter, Gurman said there was "potential" for an iPhone 15 Ultra to replace the iPhone 15 Pro...
Read Full Article • 323 comments