The original HomePod, which Apple discontinued in March 2021, now appears to be appreciating in value on online marketplace sites (via The Verge). 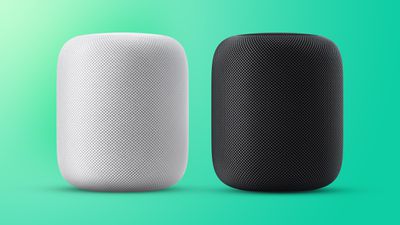 The HomePod originally debuted for $349, before Apple reduced it to $299 just over a year later. Following lackluster sales, Apple discontinued the HomePod and said it was focusing on the HomePod mini going forward. The HomePod has still continued to receive software updates and new functionality.

Over the past week, used or refurbished HomePods sold for an average price of $336.03, while new HomePods sold for an average price of $638.76, indicating a steady climb in value. The Verge places the HomePod's average appreciation at around 25 percent over Apple's $299 retail price. HomePods in used condition with no box tend to sell for prices starting at around $220, but new, factory-sealed HomePods can sell for over $500.

There has also been a noticeable decline in the number of HomePods listed for sale on eBay over time, which may contribute to the product's increase in value. Nevertheless, demand for Apple's large smart speaker appears to persist on online marketplaces, despite the device being almost five years old and containing the A8 chip from the iPhone 6.

Apple is still believed to be working on a successor to the HomePod that combines a smart speaker, Apple TV functions, and a FaceTime camera.

TheYayAreaLiving ?
This HomePod should not have been discontinued in first place.
Score: 44 Votes (Like | Disagree)

triton100
i love my HomePod, it sounds juicy and succulent, and makes me tremble to the touch
Score: 31 Votes (Like | Disagree)

Bogstandard
Imo, The so-called successor as described does not follow the mission statement of the original.
Score: 25 Votes (Like | Disagree)

I can see it’s not the HomePod failed but it’s price. Got 2 of them bought refurbished and love my babies.

The sad thing is it was phenomenal value for what you got. Incredibly so when discounted like it was. 'Good enough' is sadly enough for most people when it comes to audio quality and the proliferation of £30 Echo Dots is testament to that.
Score: 20 Votes (Like | Disagree)

PowerMac5500
I ordered a second one the day the annouced it would be discontinued. Best decision. Stereo HomePods paired with Apple TV is very nice.
Score: 19 Votes (Like | Disagree)
Read All Comments

Wednesday May 25, 2022 10:10 am PDT by Juli Clover
Apple today released a new 15.5.1 update for the HomePod and the HomePod mini, with the new software coming a week and a half after the launch of the 15.5 software for the HomePod. According to Apple's release notes, the 15.5.1 HomePod update addresses an issue that could cause music to stop playing after a short time. ‌‌‌‌‌‌‌‌HomePod‌‌‌‌‌‌‌‌‌ software is ...
Read Full Article • 53 comments

Thursday March 31, 2022 9:58 am PDT by Juli Clover
Alongside iOS 15.4.1 and iPadOS 15.4.1, Apple today released a new 15.4.1 update designed for the HomePod and the HomePod mini. The 15.4.1 update comes two weeks after the release of the 15.4 HomePod software. According to Apple's release notes, the HomePod 15.4.1 software update fixes an issue that could cause some HomeKit accessories to fail to respond when controlled via Siri voice...
Read Full Article • 98 comments

Monday April 18, 2022 4:27 am PDT by Tim Hardwick
Apple is still working on a new HomePod product that combines a speaker, Apple TV functions, and a FaceTime camera, according to reliable Bloomberg journalist Mark Gurman. In the Q&A section of his latest Power On newsletter, Gurman said he "absolutely" thinks that a new HomePod is coming that will likely be "at the center of Apple's approach" to the home. Q: Do you think a new HomePod or...
Read Full Article • 144 comments