Reactions to the new Mac Studio and Studio Display are still coming in now that users have finally gotten the products into their hands, but we're also seeing other news and rumors ramp up as we look toward what's coming later this year and beyond. 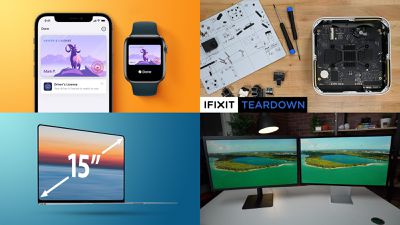 One big piece of news this week was the long-awaited debut of digital driver's licenses on the iPhone and Apple Watch. The feature is only available in one U.S. state so far, but more will be coming soon. Otherwise, this week saw a bunch of rumors about future updates to Apple's notebook and iPhone lineups, and a potential new option for how to pay for your Apple products, so read on for all of the details!

Apple this week announced that Arizona residents can now add their driver's license or state ID to the Wallet app on the iPhone and Apple Watch, providing a convenient and contactless way to display proof of identity or age. The feature requires an iPhone 8 or later running iOS 15.4, or an Apple Watch Series 4 or later running watchOS 8.4 or later.

Arizona is the first U.S. state to support IDs in the Wallet app, and 11 other states have committed to offering the feature.

After adding a driver's license or ID to the Wallet app, users can simply tap their iPhone or Apple Watch on an identity reader at select TSA security checkpoints at select airports, including Phoenix Sky Harbor International. The feature is secured by Face ID or Touch ID.

Repair website iFixit has shared a new video in which it disassembled Apple's new Mac Studio and the companion Studio Display.

iFixit is still working on its traditional, more detailed teardowns, but the video provides a few interesting details about the ‌Mac Studio‌, including that same-capacity storage replacements are possible.

As for the Studio Display, it was discovered this week that the monitor is equipped with 64GB of storage and runs a full version of iOS 15.4.

For even more on the Mac Studio and Studio Display, check out the most recent episode of The MacRumors Show, with special guest Rene Ritchie.

Apple is developing a larger 15-inch MacBook that could be released in 2023, according to research shared by Display Supply Chain Consultants. Follow-up information indicates the display will measure 15.2 inches, but it won't feature mini-LED or 120 Hz ProMotion technology and may not, and sources have differed on whether it will be marketed as a MacBook Air or something else.

In his newsletter last year, Bloomberg's Mark Gurman said that Apple considered building a 15-inch MacBook Air, but decided not to move forward with the idea for the "next generation," which suggests that the rumored 2022 MacBook Air with an M2 chip will remain a 13-inch model.

When Apple unveiled the Studio Display earlier this month, it immediately drew comparisons to LG's UltraFine 5K Display released in 2016.

Both displays feature a 27-inch screen size with 5K resolution, but the Studio Display has a $300 higher starting price, so we decided to compare the two displays to determine which is a better value.

While we are likely still a little under six months away from Apple unveiling its so-called "iPhone 14" lineup, leaked schematics have revealed some potential details about the upcoming Pro models.

Specifically, the schematics show that the "iPhone 14 Pro" and "iPhone 14 Pro Max" could feature a larger rear camera bump and a slightly thicker overall design compared to the iPhone 13 Pro models.

Farther ahead, it was rumored this week that iPhone 15 Pro models could feature an under-display Face ID system developed by Samsung.

Apple is developing a hardware subscription service that would allow customers to "subscribe" and receive an iPhone or other Apple device as part of their subscription, according to Bloomberg's Mark Gurman.

Apple is said to be aiming to make the process of buying an ‌iPhone‌ or an ‌iPad‌ "on par" with purchasing ‌iCloud‌ storage or paying for an Apple Music subscription, with customers able to subscribe to hardware with their Apple ID and App Store account.

Realityck
21 years ago MacOS X 10.0 was launched to the public on March 24th even as we are discussing all this new Mac hardware rumors this week and comparing two of the best Mac products Apple has ever produced. The 16” M1 Max MBP vs the Mac Studio M1 Ultra. Let’s not forget none of what we used currently would be the same without the work of Steve Jobs and Avie Tevanian so many years ago.
Score: 3 Votes (Like | Disagree)
Read All Comments