Apple could be working on an even larger, foldable iPad Pro model, multiple reports appear to indicate. 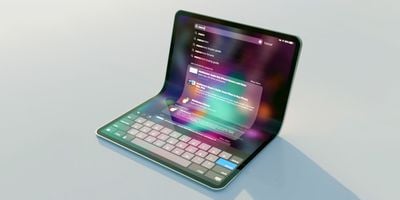 Display Supply Chain Consultants (DSCC) analyst Ross Young recently claimed that Apple is exploring the possibility of offering notebooks with foldable displays. The company is said to be discussing such devices with displays around 20 inches in size with its suppliers. This display size could allow for 4K resolutions or higher, according to Young.

Young has revealed a wide range of accurate insights into Apple's plans, such as the iPhone 13 Pro's ProMotion display, the display size and bezels of the sixth-generation iPad mini, the 14- and 16-inch MacBook Pro's mini-LED displays with ProMotion, and more, so his reports are worth taking seriously.

While Young described the device as a "foldable notebook," there is a chance that, if it is an all-screen device, it could actually be a foldable ‌iPad Pro‌. After all, a touch-based all-screen notebook running macOS would likely cannibalize the ‌iPad Pro‌, so the device running iPadOS could make more sense.

There have been sketchy rumors of Apple working on a foldable iPad Pro in the past, so the idea would not be totally unheard of. It is also noteworthy that this implementation could also line up with rumors of a larger iPad Pro.

Last summer, Bloomberg's Mark Gurman suggested that Apple was working on even bigger iPad models that could further "blur the lines" between tablet and laptop:

Young said that the launch timeframe for Apple's foldable notebook is "likely later" than 2025, with 2026 or 2027 being floated as reasonable possibilities, but there is still a chance Apple will discontinue the project long before then. He added that the foldable notebook device could compose a whole new product category for Apple, but with so little known about the mysterious new form factor at this very early stage, it still seems possible that the device could be a foldable ‌iPad‌ rather than a MacBook.

Meanwhile, Young said that Apple's long-rumored foldable iPhone has been delayed until 2025, a significant delay compared to previous predictions that the device would launch in 2023 or 2024.