We're more than halfway through February, and rumors are continuing to fly about what might be coming at Apple's rumored March event and beyond. The latest teaser comes from a regulatory database where several new Mac models have popped up. 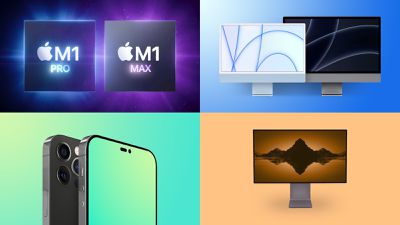 Rumors about the next 27-inch "iMac Pro" and the iPhone 14 Pro continue circulate, and we're also expecting some new Apple displays at some point, so read on for all of the details on these stories and more!

Apple is rumored to be planning a virtual event for Tuesday, March 8, and ahead of time, the company has filed three unreleased Mac model numbers in a Eurasian regulatory database, as legally required.

Apple is expected to launch several new Macs with M1 Pro/Max and M2 chips this year, but it's unclear if any will be announced at the March event. One of the new Macs listed in the database is described as a "portable" computer, suggesting that it will be a MacBook of some kind.

Other products rumored to be announced at the event include new iPhone SE and iPad Air models, both with an A15 chip and 5G. In the latest episode of The MacRumors Show, we chatted with Andru Edwards about expectations and possibilities for the event.

Apple is widely rumored to be planning a new version of the 27-inch iMac powered by M1 Pro and M1 Max chips, and while the computer was originally expected to be released in the first quarter of this year, it might end up launching a few months later.

According to oft-accurate display industry consultant Ross Young, a redesigned "iMac Pro" with a mini-LED ProMotion display could launch in June.

iPhone 14 Pro models will feature 8GB of RAM, the most memory ever offered in an iPhone, according to a rumor that surfaced out of Korea this week.

8GB of RAM would match the amount of RAM in Samsung's new Galaxy S22 models, and it would be an increase over the 6GB of RAM in iPhone 13 Pro models.

It's unclear how much RAM the standard iPhone 14 models will have, but it will likely be less than the Pro models.

Apple is Finally Making a Cheaper Display: What We Know

Apple has not offered an affordable Apple-branded display since the 27-inch Thunderbolt Display was discontinued in 2016, but that is expected to change at some point in the foreseeable future.

Rumors suggest that Apple is planning new lower-priced standalone displays that would be sold alongside the high-end Pro Display XDR. We've put together a guide covering everything that we know about these displays.

Fortnite has been unavailable to play on the iPhone and iPad since Apple banned it from the App Store in 2020 amid an ongoing legal battle with Epic Games, but the battle royale game is coming back to iOS devices thanks to Nvidia's GeForce NOW gaming service.

GeForce NOW is a browser-based gaming service that will allow ‌iPhone‌ and ‌iPad‌ users to play Fortnite using Safari, and we tried out a beta version in a recent video.

Lioness~
All rumours are on repeat, over and over again.
Not that it bothers me, I wait for these stuff just as much as everybody else do at this time.
But there much be some record here ☺️
Score: 4 Votes (Like | Disagree)

reyesmac
The days of Apples minimum ram and drive space specs need to come to an end. Every new system under $2,000 is less capable than it should be because of the low specs. If all you need from a Mac is 8gb of ram and 256gb of drive space then Apple has you covered. However, if you need both more space and more ram, every retail price of every model except the macbook pro and the mac pro goes up by $400. Since $400 is too much for simple upgrades like that then you need to evaluate which system rips you off the least, which has more bang for the buck.

It would be much easier for the consumer if Apple came out with systems that retailed $400 more than the current systems and included the extra ram and drives space. All they would need to do is slightly tweak the design so people think its a different system but the components are mostly the same from the cheaper models. Just the exterior is different and it gets an M2 chip. They can then allow custom configurations that add even more to the price.

8, 16, and 32 can be the new good, better, best. All those models would be $400 over current ones. Current ones would still be sold along side newer ones. Once they see how well it sells they can whittle down the lower priced models and stay with the higher priced ones, reducing them by $100 as the years pass. Thats how they can pass big price increases on all new models without it shocking the consumers. The new models will be such that most consumers wont need to worry about upgrading them. If they reduce the ports enough then Apple can get back into the peripheral making business to make up the lost revenue of less upgrades being purchased.
Score: 4 Votes (Like | Disagree)

Neither do I. Long time ago I learned this is biggest Wild West for speculations on the net ?

I am so waiting to toss out my old iMac for a new Mac mini or iMac however, preferable a Mac Mini Pro/Max at this point. So I hope to be overly exited soon.

I hope your bank account starts crying with purchase joy very soon. :D The M series Macs are amazing and well worth the price of admission (void where prohibited and exclusions apply).
Score: 2 Votes (Like | Disagree)

I got the impression in this article that the rumor suggests the new iMac Pro (or whatever they call it) will get an M2, but isn’t the prevailing rumor that that device will get an M1 Max with more cores?

I've been seeing a lot of M2 rumors that don't make much sense to me. Wouldn't they finish the transition from Intel before starting a new generation? The only three models that make sense for March are:

If you would wear white gloves when using the phone like I do, you wouldn't suffer from print phobia. :D Titanium would make for a very expensive phone.

I don't wear white gloves to answer the phone, but my butler does, and he answers for me and holds the phone to my ear...
Score: 2 Votes (Like | Disagree)

All rumours are on repeat, over and over again.
Not that it bothers me, I wait for these stuff just as much as everybody else do at this time.
But there much be some record here ☺️

I have learned not to get exited over Apple rumors, especially on here. I haven't seen any news to get excited over, yet. If Apple were to surprise us with a 12" M series MB, I would definitely be excited. :D

I am not upgrading my phone. I am happy with my 13 minis. I could be talked into upgrading my M1 MBA, depending on what kind of bells and whistles it comes with, not that I need much.
Score: 2 Votes (Like | Disagree)
Read All Comments