While Apple is rapidly transitioning its Mac lineup from Intel processors to its own Apple silicon, it's worth highlighting as 2021 wraps up that the relationship between Apple and Intel hasn't been entirely severed as reports indicate Apple still has one more Intel-based Mac in its pipeline that's yet to be released. 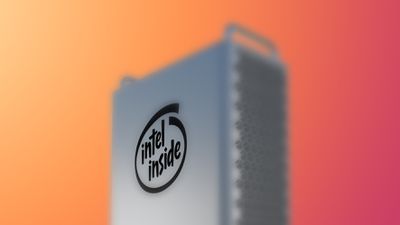 With the Mac Pro, Apple is not expected to entirely transition its most powerful Mac to Apple silicon yet, as we're expecting at least one new ‌‌Mac Pro‌‌ to feature an Intel chip. Apple is working on two new Mac Pro machines, one featuring an entire redesign, and another that will feature the current design with updated internals.

Apple silicon has proven itself to be a worthy competitor to even some of Intel's best portable processors, but it seems that Apple is not yet entirely confident enough to transition the ‌Mac Pro‌, a desktop-class professional workstation used by animators, photographers, Hollywood insiders, and more, to Apple silicon.

It may seem odd that, amid the transition of its MacBook Air, MacBook Pro, Mac mini, and iMac lines to Apple silicon, Apple would release another Mac with an Intel chip, but there are reasons even beyond performance that are likely influencing Apple's decision. Apple silicon chips run on an entirely different architecture than Intel-based Macs. On Apple silicon Macs, Apple uses Rosetta 2 to automatically and seamlessly translate apps built for Intel computers to run on Apple silicon.

While Rosetta 2 works for the majority of customers, Apple may be wanting to hold out a little longer to ensure the translation technology is more mature before allowing its most high-end professional and demanding customers to use it. By offering an Intel ‌Mac Pro‌ alongside an Apple silicon powered option, Apple can buy itself a little more time before completing its transition to its own chips.

Alleged renders of the redesigned Mac Pro featuring a smaller and more compact design
As for the redesigned ‌Mac Pro‌, expected sometime next year, it may feature up to 32 high-performance cores and up to 128 graphics cores. Some reports have suggested the new Mac Pro could be equipped with two or four dies of the M1 Max chip for ultra-high performance.
Related Roundup: Mac Pro
Tag: Apple Silicon Guide
Buyer's Guide: Mac Pro (Don't Buy)
Related Forum: Mac Pro
[ 237 comments ]

baryon
This is good news for those of us with Intel Macs, because then Apple will keep new releases of macOS Intel-compatible for much longer.
Score: 41 Votes (Like | Disagree)

emmab2006
Goooood….Makes my Hackintosh Viable for years to come ?
Score: 32 Votes (Like | Disagree)

So those will sell for 10k+, which is fine, and they will sell 3 of them…
Slow news day, needing more clicks?

This is very relevant news. There are many businesses reliant on software that won't be ported to M1 anytime soon.
Score: 29 Votes (Like | Disagree)

So those will sell for 10k+, which is fine, and they will sell 3 of them…
Slow news day, needing more clicks?

What do you mean slow news day and needing more clicks? It’s LITERALLY Apple news. Not only do people whine when they post non-Apple news, now people are getting picky with what kind of Apple info they DO post. Gee, maybe they should just shut down their site since it doesn’t cater to your sophisticated standards … or whatever. :rolleyes:
Score: 23 Votes (Like | Disagree)

satchmo
Looks like the backside of a vintage 2nd Gen Silver iPod shuffle. ?

Darmok N Jalad
Makes sense, really. Anyone buying that kind of configuration probably has very specific and critical software in mind. If Apple releases Mac Pros for both architectures next year, that would buy time for such software companies to transition from x86 to AS without making their customers bug test software in a production environment. Even just being the last Intel Mac, we don’t know how long it might stay in production. The Trash Can Mac Pro ran for many years with no significant design changes, and this last Intel Mac might do the same in order to keep a niche customer base with deep pockets.
Score: 11 Votes (Like | Disagree)
Read All Comments