It was another busy week for Apple rumors, with Mark Gurman and Ming-Chi Kuo spilling a range of details about Apple's Mac roadmap, the next AirPods Pro, Apple's AR/VR headset plans, and more. 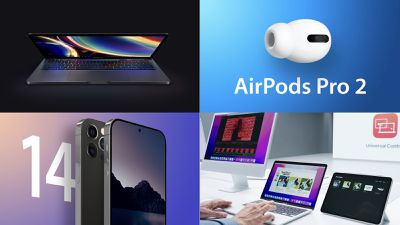 In other news, it looks like the next round of Apple software updates will be arriving shortly with iOS 15.2, macOS 12.1, and related releases. The updates will bring several new features like the Apple Music Voice Plan, SharePlay for Mac, and more, but apparently not the much-anticipated Universal Control. Read on for details on these stories and more!

Apple's transition from Intel processors to its own custom-designed chips in Macs is set to continue with the introduction of at least five new Macs in 2022, according to Bloomberg's Mark Gurman.

In the latest edition of his "Power On" newsletter, Gurman said the new Macs will include updated versions of the MacBook Air, entry-level MacBook Pro, larger iMac, Mac mini, and Mac Pro, with some of the machines expected to be powered by Apple's next-generation M2 chip.

Gurman outlined several other products that he expects to launch in 2022, including a rugged version of the Apple Watch, a redesigned iPad Pro with support for wireless charging, and an AR/VR headset with a focus on gaming, content consumption, and communications.

Apple is planning to launch iPhone 14 Pro and iPhone 14 Pro Max models with hole-punch displays next year, according to Korean website The Elec.

The hole-punch display design would allow Apple to remove the notch while still providing a cutout for the front-facing camera, and it is a design that some Android smartphones have used for a few years now, such as Samsung's Galaxy S10 and newer.

Apple plans to release second-generation AirPods Pro with a new design in the fourth quarter of 2022, according to reputable analyst Ming-Chi Kuo.

The new AirPods Pro are rumored to feature a more compact, stemless design similar to the Beats Studio Buds, while additional built-in sensors might allow for new fitness tracking capabilities and more. Catch up on our AirPods Pro 2 guide for everything we know so far.

Universal Control Not Expected to Launch With macOS 12.1 and iPadOS 15.2

Apple this week seeded Release Candidate versions of multiple software updates, including macOS 12.1 and iPadOS 15.2, but the release notes do not include any mention of Universal Control.

Given that a Release Candidate typically mirrors the final release of an update, it appears that Universal Control is not launching with macOS 12.1 and iPadOS 15.2, despite Apple having said the feature would be available this fall.

The good news is that macOS 12.1 fixes several bugs related to Tap to Click, HDR video playback on YouTube, MagSafe charging, and more.

iOS 15.2 is expected to be released to all users as early as next week, and one of the update's key new features will be the Apple Music Voice Plan, which is designed to let users access Apple Music exclusively through Siri for a lower price of $4.99 per month.

Ahead of iOS 15.2 being released, we were able to provide an early first look at the Apple Music Voice Plan, courtesy of MacRumors contributor Steve Moser.

gldoorii
I'm still waiting for a "kids mode/profile" or even a kid's iPad itself. I know that'll never happen with Apple, but it would sure make life easier as opposed to having to buy competitor products that care about kids.
Score: 1 Votes (Like | Disagree)

Think I’d actually prefer Apple Pill™ over Hole punch. How would they fit Face ID into a single hole anyway?

Maybe their prototypes show the IR sensors work fine when under display, but they are unhappy with the front facing camera quality?

My question is, where is the speaker going that allows for an all glass front display?
Score: 1 Votes (Like | Disagree)

ghanwani
The toppest story of the week is $AAPL hitting a new ATH. It will be the first company to hit a $3T market cap and that will happen next week.

TheYayAreaLiving ?
Next week should be exciting with the release of Mac OS and IOS update.
Score: 1 Votes (Like | Disagree)
Read All Comments