iOS 15.2 is expected to be released to all users as early as next week, and one of the software update's key new features is the Apple Music Voice Plan, which is designed to let users access Apple Music exclusively through Siri. 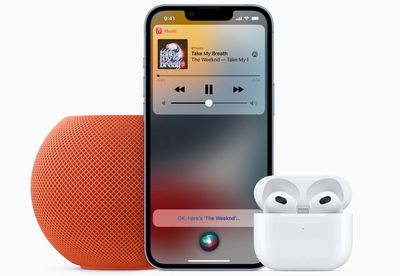 Ahead of iOS 15.2 being released, we're able to provide a first look at the Voice Plan, courtesy of MacRumors contributor Steve Moser.

Once subscribed to the Voice Plan, users can ask Siri to play music on any Siri-enabled device, including the iPhone, iPad, iPod touch, Mac, Apple Watch, Apple TV, HomePod mini, and AirPods, as well as through CarPlay. The plan also works with the "Type to Siri" accessibility feature, according to fine print on Apple's website.

With the Voice Plan, users will have access to Apple Music's entire catalog of over 90 million songs and playlists, as well as Apple Music Radio. In the Apple Music app, a dedicated "Just Ask Siri…" section provides subscribers with listening suggestions, and there is also a queue of recently played music through Siri.

Voice Plan subscribers will have full playback controls, including unlimited song skipping through Siri. If a Voice Plan subscriber attempts to control the Apple Music app without Siri, a screen pops up advising them to use Siri or upgrade to a standard Apple Music plan, which costs $9.99 per month for individuals and $14.99 per month for families.

erikkfi
This is the least desirable thing Apple has launched since the Amelio era.
Score: 32 Votes (Like | Disagree)

tomnavratil
Am I the only one who thinks this plan is so confusing and useless? I mean many users still don't understand what the hell it even is.
Score: 24 Votes (Like | Disagree)

masterleep
What more evidence do you need that Siri is a flaming pile of garbage than Apple giving you a discount if you're willing to put up with the annoyance of using it?
Score: 23 Votes (Like | Disagree)

benh911f
I have to assume Apple is banking on people getting fed up with having to use it this way that they’ll just upgrade to the normal plan.
Score: 19 Votes (Like | Disagree)

Unity451
Not to pull the Steve card, but... This would've never happened if Steve was still around.
Score: 17 Votes (Like | Disagree)

Agneev
Every Apple employee who backed this absolutely ridiculous feature is dumb as a rock.
Score: 15 Votes (Like | Disagree)
Read All Comments