The rush of Black Friday deals has passed, and while there's likely still some holiday shopping to be done, attention is also turning back to rumors with a look ahead to what we can expect in 2022. 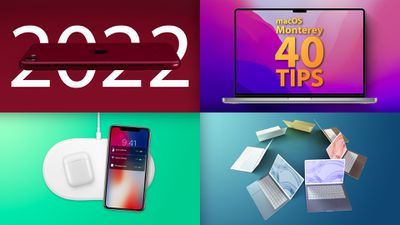 Rumors this week included the next iPhone SE reportedly coming early next year and a multi-device charger similar to Apple's canceled AirPower, while we also took a look at what we might see for a redesigned MacBook Air next year. Read on for details on these stories and more!

As the holiday season gets underway, things have been relatively quiet in the world of Apple, but we are starting to hear some rumors about products that we can expect to launch in 2022, including a third-generation iPhone SE in the first quarter of the year.

According to Taiwanese research firm TrendForce, a key new feature of this iPhone SE will be support for 5G networks, while the device is also expected to be equipped with an A15 chip like iPhone 13 models.

The current iPhone SE was released in April 2020 and features a similar design as the iPhone 8, with a 4.7-inch display, Touch ID home button, and thick bezels. The new iPhone SE is expected to remain the most affordable iPhone model in Apple's lineup.

While it has been nearly three years since Apple announced that its AirPower wireless charging mat was canceled due to quality issues, rumors have suggested Apple is still working on a similar accessory.

The latest word came from Bloomberg's Mark Gurman, who believes that Apple still intends to create a wireless charging accessory that could charge multiple devices like an iPhone, Apple Watch, and AirPods all at once.

Apple released macOS Monterey in late October with several new features like AirPlay to Mac and Live Text, and others coming soon, including SharePlay for FaceTime and Universal Control.

This week, we shared a helpful list of 40 tips, tricks, and features that are worth checking out in macOS Monterey, including some lesser-known settings that are available in apps and across the operating system.

While the latest MacBook Air is already a fan favorite thanks to the impressive performance of the M1 chip, rumors suggest that a new version of the notebook is already in development with an even faster Apple silicon chip and a significant redesign.

In addition to our MacBook Air roundup, we've put together a list of five features to look forward to in the 2022 MacBook Air based on everything that we've heard so far.

Towards the end of each year, streaming music service Spotify provides a "Spotify Wrapped" recap of each user's listening habits and favorite songs. Spotify Wrapped is a highly anticipated year-end feature that Spotify users love, and Apple Music listeners may be wondering how to get their own "Wrapped" rundown.

The closest equivalent to "Spotify Wrapped" for Apple Music subscribers is "Apple Music Replay," and we've shared step-by-step instructions on how to access this feature.

Apple has launched a new MacBook Upgrade Program that allows small business partners in the U.S. to finance MacBook Air and MacBook Pro purchases, with monthly payments starting at $30 per month.

Unlike the iPhone Upgrade Program, this program is not available to consumers at this time. For small businesses, make sure to read our coverage of the program for additional details, including how to sign up.

blcamp
I want to see the original HomePod revived and updated. Put an A12 or greater chip in it, then come and take my money!
Score: 4 Votes (Like | Disagree)

seanmills1020
The SE in iPhone SE stands for “Self-Employed”, since many are on a budget. ;)
Score: 3 Votes (Like | Disagree)

TheYayAreaLiving ?
Another week has gone by. 3 more weeks year 2021 is over.
Score: 2 Votes (Like | Disagree)

The Top Story this week was never covered by macrumors.

The Top Story was the Appeal that Apple submitted to the 9th Circuit on Tuesday, for a Stay of the Epic vs Apple Dec 9th requirement.

Dec 9th could be the single-most-important day in the history of the App Store !

How is this NOT the Top Story right now ?

Not personally even aware of that motion but Apple’s request to delay has been rejected before: https://www.macrumors.com/2021/11/09/judge-delays-apple-stay-request-epic-case/

So not sure I’d call Apple asking again to be big news — seems more of the same — but if it gets delayed it’s newsworthy sure.

cant wait for SE3, it is time to upgrade my 6s

SE3 = a turbocharged revamped 6S !!
Wish Spring 2022 would come tomorrow but guess we have to wait it out a bit more.
Score: 2 Votes (Like | Disagree)
Read All Comments