Twitter today announced that it is testing a new feature called Safety Mode, which is designed to cut down on harassment and unwelcome interactions on the social network. 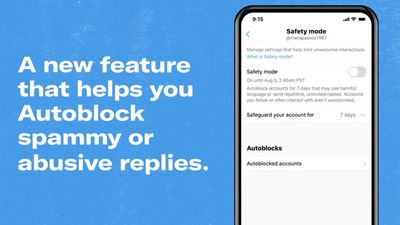 Users who often get unwanted, spammy, or abusive replies to their tweets can turn on Safety Mode, which will autoblock accounts that use harmful language like insults, or send repetitive, uninvited replies and mentions.

Twitter says that Safety Mode assesses the likelihood of a negative engagement by considering the Tweet's content and the relationship between the Tweet author and replier. People blocked by Safety Mode will be unable to follow your account, see your Tweets, or send Direct Messages.

With Safety Mode, the autoblock stays on for a minimum of seven days, and autoblocked accounts are listed in the Safety Mode interface. Accounts that a person follows will not be autoblocked.

We want you to enjoy healthy conversations, so this test is one way we're limiting overwhelming and unwelcome interactions that can interrupt those conversations. Our goal is to better protect the individual on the receiving end of Tweets by reducing the prevalence and visibility of harmful remarks.

Twitter is testing Safety Mode with a small group of people at the current time and will expand the testing group as feedback is received. During the beta testing period, Twitter says it will incorporate improvements and adjustments before releasing the feature for all users.

transpo1
Great— so now everybody on Twitter will be grouped into their own silos and echo chambers even more than they already are. Nobody will change anybody’s opinion since you’re unlikely to hear dissenting voices and the divide between people will become even greater.

The Clark
Great, who wants to hear other opinions anyway?

Psychicbob
If you ask a question, or people express an opinion on something you said, on social media, it’s the same as going into the crappiest city you can find, finding the crappiest bar in that city, and finding the biggest moron in that bar, and then listening to what they say. Social Media is the worst thing to happen to humankind, ever.
Score: 7 Votes (Like | Disagree)

macduke
It would be nice if Twitter would just automatically ban users who "…may use harmful language or send repetitive, uninvited replies."

Of course the best, most obvious choice is to just not use Twitter or any social media. They are doomsday devices—especially FaceBook.
Score: 6 Votes (Like | Disagree)

Great— so now everybody on Twitter will be grouped into their own silos and echo chambers even more than they already are. Nobody will change anybody’s opinion since you’re unlikely to hear dissenting voices and the divided between people will become even greater.

There is a minority group who's mind cannot be changed. They call everyone else sheep. Without realizing they are sheep. Just in a different flock.
Score: 6 Votes (Like | Disagree)

Darmok N Jalad
Reminds me of a quote I once heard from a radio personality. "Just because your words now travel around the world, that doesn't mean they are any more important than when they could only reach to the other end of the bar."
Score: 5 Votes (Like | Disagree)
Read All Comments