On this day ten years ago, Steve Jobs resigned as CEO of the company he built and officially named Tim Cook as Apple's new head. Two months later, Steve Jobs passed away and the future of Apple lay solely on the shoulders of Tim Cook. 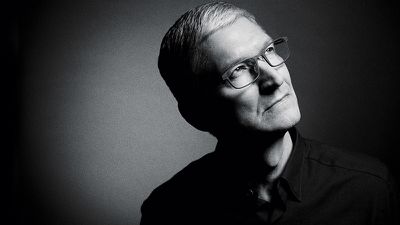 ‌Tim Cook‌ took over Apple at a turbulent time when Jobs was battling pancreatic cancer and the company's future seemed uncertain. Questions were widespread after ‌Tim Cook‌ took over, including whether Cook would continue in the footsteps of Jobs or create a new vision for the future of Apple.

A day after he became CEO, Cook sent a letter to Apple employees, promising that despite Jobs no longer being at the helm, Apple "is not going to change."

The first device that launched with ‌Tim Cook‌ as CEO was the iPhone 4S in 2011, which was announced one day before Jobs' death. Jobs had overseen the development of the device, but it was the first ‌iPhone‌ that had launched under ‌Tim Cook‌.

Cook's second "One more thing" reveal would arrive in 2017, the year that marked the tenth anniversary of the first ‌iPhone‌. For this special occasion, Apple announced the ‌iPhone‌ X, featuring the biggest redesign to the ‌iPhone‌ in its history.

In the years that followed, Apple under Cook would release new products and services, and would go on to become the world's first trillion-dollar company. Looking forward, Cook has said he doesn't expect to remain Apple's CEO for the next ten years, but his influence on the company is surely not done just yet.

BarredOwl
I used to like him. I used to trust him.

Now, I believe Steve made a mistake.

SnakeEater1993
10 years since Apple changed its policy from ''I will spend my last dying breath if I need to, and I will spend every penny of Apple's $40 billion in the bank, to right this wrong. I'm going to destroy Android, because it's a stolen product. I'm willing to go thermonuclear war on this.''' to just releasing almost the same iPhone every year to keep shareholders happy...
Score: 34 Votes (Like | Disagree)

yabeweb
I am quite sure that if Steve was alive he would be showing the finger outside Apple headquarter as he did with IBM.

Apple turned into what it was fighting against.
Score: 32 Votes (Like | Disagree)

now i see it
For many, the company turned into one many people don't care about any more
Score: 30 Votes (Like | Disagree)

Spock
You can tell he is a numbers man but clearly he knows what he is doing. People have to stop comparing him to Steve, he was one of a kind.
Score: 21 Votes (Like | Disagree)
Read All Comments