We're rapidly approaching Apple's busy product launch season, and rumors are continuing to fly. It sounds like Apple has enough products in the pipeline that it'll need to hold multiple virtual events before the end of the year to introduce them all, so get ready for a flurry of activity over the next few months. 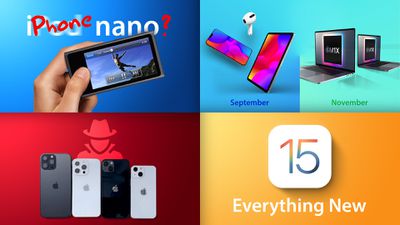 Other news this week included a fresh round of betas for iOS 15 and most of the associated operating system updates, reducing the update interval to one week as Apple finalizes things ahead of an expected September public launch. We also saw an interesting story of a "double agent" in the Apple leaker community, confirmation of a never-released "iPhone nano" thanks to an old email from Steve Jobs, and more.

With summer coming to an end, Apple's busy fall season will soon be upon us. It was reported this week that Apple plans to hold multiple events this fall, with several new products expected to be announced, ranging from iPhone 13 models in September to highly-anticipated 14-inch and 16-inch MacBook Pro models with a so-called "M1X" chip by November.

Another report has indicated we could even see multiple events within the same month of September. Regardless of the timing, Apple's events will likely remain virtual due to continued health and safety measures, with a live stream available on its website and YouTube for customers to watch around the world.

Apple seeded the sixth betas of iOS 15 and iPadOS 15 to developers this week for testing, and as usual, we've rounded up everything new, including a new option for the Safari address bar.

In the release notes for the betas, Apple revealed that SharePlay has been postponed beyond the initial public release of iOS 15. Apple said the feature will now be enabled in a future software update later this year.

For more than a year, a member of an online community leaking internal Apple information was actually serving as a "double agent" for Apple by secretly providing the company with information about other leakers, according to a report this week.

The individual advertised internal Apple information and stolen devices for sale on platforms like Twitter and Discord. However, unbeknownst to other members of the community, he was secretly emailing Apple information about others.

In a 2010 email surfaced in the Epic Games v. Apple trial, the late Steve Jobs listed an "iPhone nano" as a product on the company's roadmap.

The device likely would have been a smaller, lower-priced version of the iPhone 4, but Apple never released such a product. In fact, it wasn't until 2014 that Apple started offering its latest iPhone model in multiple sizes with the introduction of the iPhone 6 and iPhone 6 Plus.

In line with information shared by leaker Jon Prosser earlier this year, new renders of the alleged Apple Watch Series 7 have surfaced, revealing a new design with flat edges and a larger display. This would be the first significant design change to the Apple Watch since the Series 4 was released in 2018.

Apple is expected to unveil the Apple Watch Series 7 at a September event alongside the iPhone 13 lineup. iPhone 13 Pro models could be available with up to 1TB of internal storage.

Apple is researching a MacBook keyboard that features a removable key that can be used as a mouse, according to a newly published patent application with the U.S. Patent and Trademark Office.

The key would contain a sensor allowing it to be used as a pointing device, providing MacBook users with an additional option beyond the built-in trackpad for input without needing to carry around a separate mouse.

SoulBlighter
No, please no removable key to use as a mouse. Laptops have trackpads. If you want to accessorize and carry a mouse thats on you. Don't make everyone else suffer for something most people won't use. Like Touchbar.
Score: 6 Votes (Like | Disagree)

This is the internet so I’m prepared to be told why this is a dumb idea, but why not just have, like, 1 big event instead if 2-3 smaller ones?

A major (profitable) product might be drowned out by the distraction and attention given to other products.... if they were all introduced at the same time.
Score: 5 Votes (Like | Disagree)

I have Macbook Pro 2019 and it works flawlessly. What happened to yours?

The Clark
I've never been more excited for a Macbook Launch.

My 2020 dual core i5 MBA preforms horrendously and I should have never bought it. I need an upgrade desperately!
Score: 4 Votes (Like | Disagree)

I've never been more excited for a Macbook Launch.

My 2020 dual core i5 MBA preforms horrendously and I should have never bought it. I need an upgrade desperately!

I have Macbook Pro 2019 and it works flawlessly. What happened to yours?
Score: 4 Votes (Like | Disagree)
Read All Comments

Saturday May 21, 2022 9:00 am PDT by Hartley Charlton
With around four months to go before Apple is expected to unveil the iPhone 14 lineup, the overwhelming majority of rumors related to the new devices so far have focused on the iPhone 14 Pro, rather than the standard iPhone 14 – leading to questions about how different the iPhone 14 will actually be from its predecessor, the iPhone 13. The iPhone 14 Pro and iPhone 14 Pro Max are expected...
Read Full Article • 354 comments