Users who have been eagerly anticipating the launch of a larger iMac with a powerful Apple silicon chip may be in for disappointment, as the machine now looks to be delayed into next year. 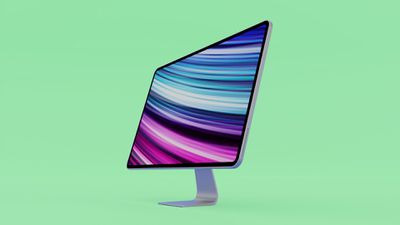 The leaker known as "Dylandkt" has claimed that Apple's "high end ‌iMac‌" will not be released in the fourth quarter of 2021 alongside Apple's "M1X Macs," a reference to Apple's redesigned MacBook Pro models, because "Apple simply does not want their devices to compete for attention and delays in product releases have led to this timetable."

‌Dylandkt‌ has remained adamant that an "M1X" Apple silicon processor is destined for high-end "Pro" Macs, which could include the upcoming MacBook Pro models and a larger, more powerful ‌iMac‌ model. Apple is expected to release 14-inch and 16-inch MacBook Pro models at some point between September and November. Reliable Bloomberg journalist Mark Gurman has said he also expects the larger redesigned ‌iMac‌ to feature an "M1X" or "M2X" chip, but he has stopped short of offering launch timing details.

The current 27-inch Intel-based models that remain in Apple's lineup launched over a year ago in August 2020, suggesting they are reaching the end of their product cycle. A new larger ‌‌iMac‌‌ would likely feature several changes that debuted in the latest 24-inch model, such as a thinner overall design, studio-quality microphones, and of course more powerful Apple silicon chips replacing Intel processors.

‌Dylandkt‌ has correctly predicted details about a number of Apple's recent product launches. As early as November 2020, the leaker claimed that the next-generation iPad Pro would feature an ‌M1‌ chip, five months before the device emerged. Prior to the launch of the 24-inch ‌‌iMac‌‌ earlier this year, ‌Dylandkt‌ also correctly predicted that the new, redesigned ‌‌iMac‌‌ would replace the smaller entry-level ‌‌iMac‌‌ only and feature an ‌‌M1‌‌ chip rather than an M1X. These accurate predictions give more credence to the leaker's claim that the new ‌iMac‌ is still some way off.