Walter Isaacson, the biographer of Steve Jobs, is penning a book about entrepreneur and business magnate Elon Musk, according to Musk. 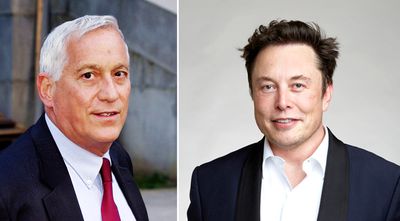 "If you're curious about Tesla, SpaceX & my general goings on, @WalterIsaacson is writing a biography," tweeted Musk on Thursday.

In subsequent tweets, Musk revealed that Isaacson had been shadowing him "for several days so far," and said he thought all the author's biographies were good, but he "particularly liked" Isaacson's biography of Benjamin Franklin.

If you’re curious about Tesla, SpaceX & my general goings on, @WalterIsaacson is writing a biography — Elon Musk (@elonmusk) August 5, 2021

Isaacson's forthcoming Musk biography will undoubtedly pique the interest of some Apple watchers, since the book is likely to provide additional insight into Apple's rocky relationship with Tesla, and more recently, Musk himself.

Apple and Tesla have been at odds since Apple started working on the ‌Apple Car‌ project and have notoriously poached employees from one another. Back in 2015, Musk famously called Apple the "Tesla Graveyard," and said "If you don't make it at Tesla, you go work at Apple."

In December, Musk claimed that he had attempted to speak with Apple about a possible acquisition of Tesla at one point in Tesla's early days, but Apple CEO Tim Cook refused to meet with him.

More recently, Musk criticized Apple's use of cobalt in its products and implied that its business model was a "walled garden" because Apple dictates what software can be installed on the iPhone and requires companies to use its ‌App Store‌.

Just last month, it was reported that Musk once demanded that he be made Apple CEO in a brief discussion of a potential acquisition with ‌Tim Cook‌. Musk has since personally refuted the claim, and even denied that he and Cook have ever spoken or written to each other.

As for Isaacson, since the publication of his best-selling Jobs biography in 2011, the writer has spoken variously about Apple-related topics with keen insight, likely as a result of his deep dive into the company when Jobs was at the helm.

In 2017, he remarked that Apple was no longer the most innovative company, and singled out Apple's lack of movement in the virtual assistant space as an example of where the company had been left behind by the likes of Google and Amazon.

In 2019, Isaacson also revealed that he had "softened" parts of Jobs' biography, particularly criticisms Jobs had made about ‌Tim Cook‌ for not being a "product person."

Isaacson's biography of Jobs went on to be the basis for Aaron Sorkin's screenplay of the Danny Boyle-directed film "Steve Jobs." The film was well received by critics, earning four Golden Globe Award nominations and two Academy Award nominations.

But the genius of Steve Jobs will be alongside names like Michelangelo, Picasso, and Da Vinci.

iapplelove
Like him or not, he sure is more interesting than Tim Cook.
Score: 13 Votes (Like | Disagree)

Nimrad
Both Steve Jobs and Elon Musk definitely had different personalities than the usual CEOs out there. The other common factor: they both seem to attract love him or hate him attitudes. Gonna be an interesting read.
Score: 11 Votes (Like | Disagree)

based on vanity as recent stories have suggest he wants to be like Steve with his Tesla aquasistion and demanding CEO being similar to the NeXT deal.

Both Cook and Musk have said they never talked to each other, why do you guys keep insisting this is true?
Score: 11 Votes (Like | Disagree)

dapa0s
Steve Jobs is so much better and cooler than the nerd Musk. I bet the wannabe Musk offered Isaacson a ton of money, so that the same guy that wrote Job‘s biography could write his. Pretty sad.

edit: for all the people downvoting

Mrjetsondc
The Jobs book was a work of art. I adore biographies. Isaacson is gonna kill it with this one- I hope he exposes Musk for the rich, privileged, blood-diamond mining, charlatan he can be at times.
Score: 8 Votes (Like | Disagree)
Read All Comments