Tesla CEO Elon Musk reportedly once demanded that he be made Apple CEO in a brief discussion of a potential acquisition with Apple's current CEO, Tim Cook. The claim comes in a new book titled "Power Play: Tesla, Elon Musk and the Bet of the Century," as reviewed by The Los Angeles Times. 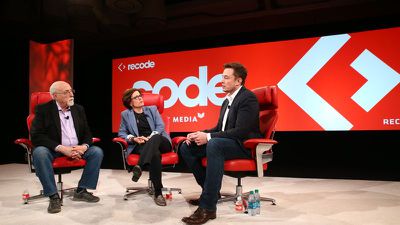 According to the book, during a 2016 phone call between Musk and Cook that touched on the possibility of Apple purchasing Tesla, Musk told Cook that a purchase of Telsa by Apple could only go forward if he became CEO of the combined company.

Apple Chief Executive Tim Cook and Tesla Chief Executive Elon Musk are talking on the phone. The 2016 unveiling of the make-it-or-break-it Model 3 is coming soon, but Tesla is in serious financial trouble. Cook has an idea: Apple buys Tesla.

Sure, says Cook. When Apple bought Beats in 2014, it kept on the founders, Jimmy Iovine and Dr. Dre.

Elon Musk has previously claimed that he once reached out to Tim Cook to "discuss the possibility of Apple acquiring Tesla." Cook, according to Musk, declined to take the meeting. The new book claims that while a meeting never took place, a phone call between the two CEOs did. It is worth noting, however, that during an interview with The New York Times' Kara Swisher in April, Cook said he had never spoken to Musk but has "great admiration and respect" for Tesla.

Update: In a tweet, Elon Musk is denying the contents of the book, calling it both "false and boring."

Update 2: Musk has shared another tweet explicitly denying that he and Cook have ever spoken or written to each other, reiterating his statements from months ago that he had at one point requested a meeting with Cook to discuss the possibility of Apple acquiring Tesla but that Cook refused the meeting.

Cook & I have never spoken or written to each other ever. There was a point where I requested to meet with Cook to talk about Apple buying Tesla. There were no conditions of acquisition proposed whatsoever. He refused to meet. Tesla was worth about 6% of today’s value. — Elon Musk (@elonmusk) July 30, 2021

Honestly I would’ve said and done the same thing
Score: 25 Votes (Like | Disagree)

Motionblurrr
Lmao, Tim Cook is a savage. Steve Jobs was very adamant to have him as next CEO before he passed, for good reason. Other CEOs would’ve either caved or reject him nicely.

Elon Musk is nothing but a tech conman. He peddles his half baked garbage to the tech nerds with deep wallets. He’s not funny at all and using 14 year old memes isn’t a personality.

Mad4WDW
Defo lies. It would've been Duck You
Score: 19 Votes (Like | Disagree)

masteroflondon
Anyone else I'd refuse to believe this, but Elon Musk? Maybe it's true. In which case there is not enough laughter in the world to respond to this demand.
Score: 16 Votes (Like | Disagree)

I swear Musk was just screwing with Cook. He never would’ve sold Tesla and that was his was of saying it
Score: 16 Votes (Like | Disagree)

Tymmz
If true I'm glad this didn't happen. I like reading about any Apple related news and rumours. I can't imagine seeing or listening to Musk any more than I already have to.
Score: 16 Votes (Like | Disagree)
Read All Comments

Monday August 23, 2021 4:16 pm PDT by Juli Clover
Apple CEO Tim Cook is set to join other tech executives in a cybersecurity meeting with U.S. President Joe Biden next week, reports Bloomberg. The meeting will focus on the efforts by private companies to improve cybersecurity following a surge in online attacks over the course of the last year, an official familiar with the event told Bloomberg.The executives could discuss efforts...
Read Full Article • 176 comments

Thursday January 6, 2022 2:06 pm PST by Juli Clover
Apple CEO Tim Cook's earnings totaled $98.7 million in base salary, stock, and other compensation, according to a statement that Apple filed with the SEC today. Cook earned a $3 million base salary, and he was provided with stock award of $82,347,835. This stock award is RSUs that will vest over time, and it includes $44.8 million in performance-based stock awards and $37.5 million in...
Read Full Article • 181 comments