Apple is looking to add Fitness+ Audio Meditations to the Mindfulness Apple Watch app, according to a now-removed image from WWDC. 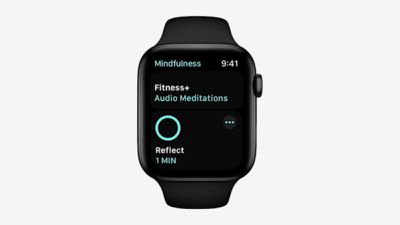 Apple's Platforms State of the Union video featured a brief image of a collection of devices running the company's various new operating systems, and the Apple Watch in that image showed the Mindfulness app with a Fitness+ Audio Meditations feature.

Apple has now attempted to hide its plans for Fitness+ Audio Meditations by uploading a wholly new Platforms State of the Union video that removes the implicating image, replacing it with a generic image of the Mindfulness app. MacRumors was able to verify that Apple revealed the feature in the original video.

At the time of writing, Apple has kept the original video with the image showing Fitness+ Audio Meditations live for the American sign language version of the Platforms State of the Union.

Fitness+ Audio Meditations may allow Apple to begin to compete with popular existing guided meditation apps such as Headspace, and could help users learn to meditate through spoken instructions and sound.

In watchOS 8, Apple has renamed the Breathe app "Mindfulness," refocusing it around short meditation practices, tips, and thought-provoking themes. The app has been overhauled with new animations and visualizations, a new summary screen, and other general improvements.

Given the fact that Apple has hastily attempted to remove the first look at Fitness+ Audio Meditations, it is likely that the feature is being kept back for a formal announcement at a later date, perhaps prior to the public release of watchOS 8.

alexjholland
Maybe the new mindfulness app will be an iPhone too, so it can be included in Shortcuts?

Right now the 'Breathe' app is Watch-only - so I can't create add it to any shortcuts.
Score: 4 Votes (Like | Disagree)

joiwomcow
Please please make one of the "audio meditations" the one at the start of Booksmart:
Score: 3 Votes (Like | Disagree)

himanshumodi
While this is great. I wish Apple can improve the current offering before adding new kinds of workouts. Two things I really want - Creating workout calendars, basically a 8-12 week kind of a program. And ability to access different fitness+ profiles from a single iPad. Annoying to get my apple watch logging my wife's workouts.
Score: 3 Votes (Like | Disagree)

bsamcash
Apple has been “accidentally” leaking a lot of stuff lately.
Score: 2 Votes (Like | Disagree)

Yokon54
Nothing is an accident.
Score: 2 Votes (Like | Disagree)

Maybe the new mindfulness app will be an iPhone too, so it can be included in Shortcuts?

Right now the 'Breathe' app is Watch-only - so I can't create add it to any shortcuts.

It strikes me as odd, that the Breathe app isn’t universal, especially if it is so beneficial.
Score: 2 Votes (Like | Disagree)
Read All Comments

Monday November 1, 2021 7:00 am PDT by Eric Slivka
Following their appearance in iOS 15.1 and some celebrity leaks, Apple's Beats brand today is officially announcing Beats Fit Pro, fitness-focused wireless earbuds that include flexible wingtips to help them fit securely in the ear. Subscribe to the MacRumors YouTube channel for more videos. The $200 Beats Fit Pro also include all of the features you'd expect from higher-end Apple earbuds,...
Read Full Article • 215 comments