Apple has made no mention of Find My integration for the Siri Remote designed for the second-generation Apple TV 4K, but ‌Siri‌ responses to certain requests about the remote suggest that Apple could perhaps have such a feature in the works, or at the least, might have considered adding it. 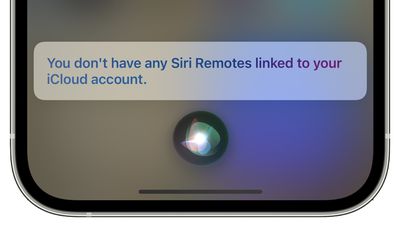 If you ask ‌Siri‌ to "Find my ‌Siri‌ remote," "Find my ‌Apple TV‌ remote," or even just "Find my remote," ‌Siri‌ will provide the following response: "You don't have any ‌Siri‌ Remotes linked to your iCloud account." The curious ‌Siri‌ response was first found by 9to5Mac. If you ask about another item that might perhaps have ‌Find My‌ integration with an AirTag, such as keys or a wallet, ‌Siri‌ says "You don't have any items set up in the ‌Find My‌ app."

If you ask about a device with no ‌Find My‌ integration like the Apple Pencil, ‌Siri‌ says "That type of device can't be set up in the ‌Find My‌ app, so I'm not able to find it for you." The new remote response is limited to iOS 14.5, and ‌Siri‌ does not understand the same request on devices running earlier versions of iOS, but there is one notable caveat here -- a MacRumors reader has pointed out that ‌Siri‌ will also sometimes give a similar response when asked to "‌Find My‌ AirPower," but other Apple devices don't seem to give the same answer.

Prior to the launch of the revamped ‌Apple TV‌ 4K, there were rumors from Bloomberg suggesting the remote designed for the device would indeed have ‌Find My‌ integration to allow it to be found should it be lost in the house. When introducing the ‌Apple TV‌ 4K and the new remote, though, Apple did not make any mention of ‌Find My‌ integration, nor is it anywhere on Apple's site or press materials related to the new devices. The remote also does not have a U1 chip like the AirTags for close-proximity location purposes.

It's possible that some kind of ‌Find My‌ integration is coming in the future, or that it's a feature that was considered for the ‌Siri‌ Remote and later scrapped, but it's not clear either way. We should find out more when the ‌Siri‌ Remote is available, or if Apple removes the ‌Siri‌ response from iOS.

SkippyThorson
Let’s address the elephant in the room…

Siri has absolutely no idea and didn’t understand the question. ?
Score: 16 Votes (Like | Disagree)

countryside
Siri is a VERY credible source. Therefore, it appears Apple is testing the idea of renaming the AirPods to "Apple Pencil."

Yes, Airtag tech would be super cool in the remote but it will be a nice bonus if it ever happens. Yes, these devices get lost in a couch or whatever, but they do NOT typically leave the home (obviously, someone's gonna have an exception to everything), it's just not the same as needing 'Find My' on a phone...or your iPad...or your Mac...or AirPods...or your keys...or bags – all things that regularly leave your house. Not a TV remote or a HomePod mini.

The Apple tv remote goes missing for months on end in my house ( 2 kids under 5). We find it in places you wouldn't expect. I would really find a trackable remote useful for that alone. I'm reluctant to add an airtag to the remote as I have a 2 year old and he might swollow it.
Score: 8 Votes (Like | Disagree)

Enclavean
Siri is very accurate, I asked her about a new iPad mini and she started laughing
Score: 8 Votes (Like | Disagree)

Yes, these devices get lost in a couch or whatever, but they do NOT typically leave the home

The whole premise of the AirTag ad was a guy getting sucked in a couch. Finding a remote there is a perfect use case for that scenario.
Score: 7 Votes (Like | Disagree)

NoGood@Usernames
At the very least, it would be nice to have an internal speaker like so many other remotes. In that case, you could ask Siri where your remote is and it could beep or play a tone for finding it in the couch cushions or throughout the room/house.
Score: 7 Votes (Like | Disagree)
Read All Comments

Tuesday March 30, 2021 12:23 am PDT by Sami Fathi
Rumors that Apple intends to launch a new Apple TV have been around for some time, with the headlining feature being a more powerful processor for gaming and all-round performance benefits. However, alongside a new powerful chip, new evidence is pointing towards a possible new Apple TV remote also shipping alongside the TV set-top box. According to a report from 9to5Mac, citing people...
Read Full Article • 117 comments

Wednesday May 12, 2021 8:00 am PDT by Juli Clover
Earlier this week, we shared a 3D-printed Apple TV Remote case that's designed to house an AirTag, adding much-needed Find My functionality to the Siri Remote. We thought we'd check out one of the remote cases in person, and have had one printed up. Subscribe to the MacRumors YouTube channel for more videos. The Etsy seller who designed the case sells it for $12.99, but if you have your own...
Read Full Article • 42 comments

Saturday June 5, 2021 1:11 am PDT by Hartley Charlton
A large group of Apple employees are opposing the company's plans to require three days of in-person work a week from September, according to a internal letter seen by The Verge. In the detailed letter sent yesterday afternoon, addressed to CEO Tim Cook and the company's executive leadership, the Apple employees said that they want a more flexible approach where those who want to work...
Read Full Article • 1555 comments

Monday January 24, 2022 10:15 am PST by Juli Clover
A number of developers are upset with an increasingly problematic iCloud server issue that is causing some apps that have implemented iCloud support to fail to sync properly. As outlined on the Developer Forums and on Twitter, there are CloudKit connectivity issues that have been occurring since November. Some users of apps that have iCloud support built in are seeing the following message:...
Read Full Article • 154 comments