Back in January, we saw a few promotional images for third-party AirTags accessories from both Nomad and Spigen's Cyrill brand, and while Apple's item trackers have yet to launch, we're now seeing more signs of similar accessories starting to show up in the wild.

An increasing number of sellers on eBay, Walmart, Etsy, and other online marketplaces are now offering ‌AirTags‌ holders for sale as details on the device continue to spread. 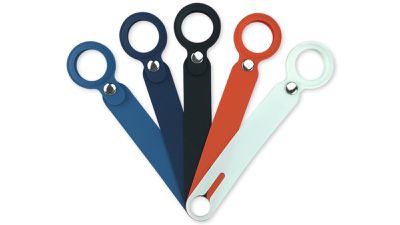 MacRumors has also received a pair of images of one particularly interesting set of straps that our source says are made of a similar material as the fluoroelastomer Apple uses for its Apple Watch Sport Bands. The band design appears to have a snap closure to secure the AirTag and a short leash with an opening at the opposite end to allow the strap to be secured to an object to be tracked.

An image of a very similar but not identical design has been shared on Weibo today by leaker UnclePan (via DuanRui). This design appears to rely on the elasticity of the strap rather than a snap to hold the AirTag in place.

The increasing number of third-party ‌AirTags‌ accessories comes just ahead of Apple's "Spring Loaded" event tomorrow, although it's still unknown whether the accessory will make an appearance at the event. The first hints of ‌AirTags‌ surfaced in leaked code two years ago, and they've yet to be officially unveiled, but information on them is clearly circulating among accessory manufacturers.

Apple's infrastructure to support ‌AirTags‌ is already in place, as the company earlier this month launched its Find My network accessory program that lets third-party devices like Belkin earbuds, Chipolo item trackers, and VanMoof e-bikes be tracked right in the Find My app.

‌AirTags‌ are expected to work in exactly the same manner, except with Ultra Wideband U1 chip support that would allow for greater accuracy than standard Bluetooth and even an augmented reality experience to help direct you right to a lost item.

Do you have car keys? House keys? Do you ever carry a backpack? Attaching air tags to any would be useful.

I agree, I can’t tell you how many times I’ve had to walk to work because my car keys just up and vanished. Problem identified, problem solved.
Score: 11 Votes (Like | Disagree)

I just realized someone should make AirTag jewelry. Was thinking in the vein of DogTags. Apple’s AR strategy so we can have information overlayed so we don’t forget people’s names. I’m honestly struggling to find a use for these but I guess these are more an accessory than a product.

mrr
If the air tags had a simple hole in them you would need to buy these accessories.
Score: 8 Votes (Like | Disagree)

I’m honestly struggling to find a use for these but I guess these are more an accessory than a product.

Do you have car keys? House keys? Do you ever carry a backpack? Attaching air tags to any would be useful.
Score: 6 Votes (Like | Disagree)
Read All Comments