Apple today announced a "first-of-its-kind carbon removal initiative" called the Restore Fund that will make investments in forestry projects to remove carbon from the atmosphere while generating a financial return for investors. 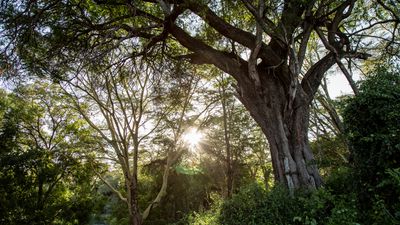 Launched with Conservation International and Goldman Sachs, Apple says the $200 million fund aims to remove at least one million metric tons of carbon dioxide annually from the atmosphere, equivalent to the amount of fuel used by over 200,000 passenger vehicles, with a viable financial model aimed at increasing investment in forest restoration.

Apple says this effort is part of the company's goal to become carbon neutral across its entire "value chain" by 2030. Apple plans to directly eliminate 75 percent of emissions for its supply chain and products by 2030, while the fund will help address the remaining 25 percent of Apple's emissions by removing carbon from the atmosphere.

Nature provides some of the best tools to remove carbon from the atmosphere. Forests, wetlands, and grasslands draw carbon from the atmosphere and store it away permanently in their soils, roots, and branches. Through creating a fund that generates both a financial return as well as real, and measurable carbon impacts, we aim to drive broader change in the future — encouraging investment in carbon removal around the globe. Our hope is that others share our goals and contribute their resources to support and protect critical ecosystems.

As part of this initiative, Apple and Conservation International have partnered with local conservation organizations in Kenya to restore degraded savannas in the Chyulu Hills region. If similar efforts are scaled up across Africa, Apple says savannah restoration could remove hundreds of millions of tons of carbon from the atmosphere each year.

Scipster
Good for Apple! Slightly more than $1 per purchase til Earth Day.

Now this will make a difference :)
Score: 11 Votes (Like | Disagree)

JEY
There is nothing more important. Every little bit helps...
Score: 10 Votes (Like | Disagree)

TheYayAreaLiving ?
THis is definitely good move by Apple.
Score: 9 Votes (Like | Disagree)

telo123
Awaiting for the trolls to say, “Oh my god, Apple is a trillion dollar company, they should donate MORE!”

As if they ever contributed anything :D

but for my own opinion, good move Apple!!
Score: 8 Votes (Like | Disagree)

Kabeyun
Another good move. And as a preemptive reply to the anticipated snark, just because Apple doesn’t do everything right doesn’t diminish efforts to do some things right. As far as major corporations go, and certainly versus competitors, Apple has come a long way ('https://www.businessinsider.com/apple-greenest-tech-company-greenpeace-2017-1?op=1') since being lambasted ('https://www.cnet.com/news/greenpeace-apple-clash-over-toxic-waste/') by Greenpeace, and is without question a leader in moving towards environmental responsibility.
Score: 8 Votes (Like | Disagree)
Read All Comments

Thursday May 13, 2021 12:10 am PDT by Sami Fathi
Apple has fired Antonio García Martínez, an ex-Facebook product manager and author of the controversial book "Chaos Monkeys," following public and internal calls for removal and investigation due to past misogynistic statements, The Verge reports. Apple hired Martínez earlier this week to join its ads team, however, comments that Martínez made in the past sparked condemnation from users...
Read Full Article • 388 comments

Tuesday April 27, 2021 10:40 am PDT by Juli Clover
Russia's Federal Anti-Monopoly Service (FAS) has levied a $12 million fine against Apple for alleged abuse of its dominance in the mobile applications market, reports Reuters. According to the FAS, Apple's distribution of apps through iOS gives its products a competitive advantage. Apple has been charged 906.3 million roubles, equivalent to $12.1 million. The fine stems from an August...
Read Full Article • 178 comments

Friday April 16, 2021 2:08 am PDT by Tim Hardwick
Firefox will soon hand over FTP requests to other applications, as Mozilla begins to phase out the browser's long-standing FTP implementation in the next stable release. Mozilla announced its intention to disable support for the FTP protocol last year, but the plan was delayed because of the global health crisis. One of the oldest network protocols still in use, FTP handles file...
Read Full Article • 33 comments

Apple Pay Promo Offers 10% Back in Bed Bath & Beyond Rewards

Friday March 5, 2021 1:26 am PST by Tim Hardwick
Apple has sent out a new Apple Pay promotional email, offering Bed Bath & Beyond customers 10% back on purchases in the form of My Funds rewards when using Apple's digital payment service. My Funds is a program run by Bed Bath & Beyond that rewards its customers for shopping and engaging with the company. The rewards can be redeemed in store at Bed Bath & Beyond, buybuy BABY and Harmon Face...
Read Full Article • 14 comments

Monday April 26, 2021 5:00 am PDT by Tim Hardwick
A ransomware group that last week stole schematics from Apple supplier Quanta Computer and threatened to release the trove of documents has mysteriously removed all references related to the extortion attempt from its dark web blog, MacRumors can confirm. The ransomware group known as REvil claimed last Tuesday that it had accessed the internal computers of Taiwan-based Quanta and managed to ...
Read Full Article • 105 comments