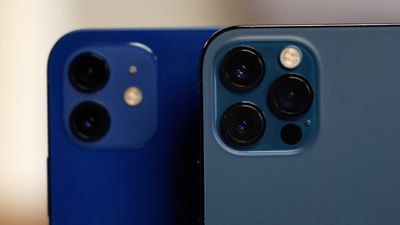 Apple introduced the 5.4-inch ‌iPhone‌ mini in the ‌iPhone 12‌ lineup and plans to continue to sell a 5.4-inch device in 2021, but it looks like the size will be discontinued after that, if Kuo's information is accurate. The iPhone 12 mini has not been selling as well as expected, according to multiple iPhone sales estimates.

Along with streamlining size options, Kuo believes that Apple will introduce significant camera upgrades in the 2022 iPhones, adding a 48-megapixel camera in the high-end iPhone 14 models. Kuo says that the upgraded camera lens will take ‌iPhone‌ camera photography "to a new level."

Along with a 48-megapixel lens that will also be able to output in 12-megapixels, Kuo expects the high-end iPhones to be capable of recording 8K video, and he says that in the future, watching iPhone-recorded videos on an 8K display or TV will "offer a better user experience."

Because the best resolution for augmented and mixed reality is 8K to 16K, Kuo says that the 48-megapixel camera in the 2022 ‌iPhone‌ will create videos and images "more suitable for AR/MR devices" and that will "enhance the AR/MR user experience."

As for future iPhones, Kuo says that Apple will adopt a periscope telephoto lens in 2023, along with under-display Face ID, which would presumably see the elimination of the notch. Kuo previously said that Apple would introduce a hole-punch front camera in the 2022 iPhone and that at least one ‌iPhone‌ in 2023 would feature under-display Touch ID and a full-screen display with no notch or holes.

LimitR
My God. Don’t take away our mini! It only just arrived.
Score: 58 Votes (Like | Disagree)

Scoob Redux
Looks like it'll be a max-spec late 2021 Mini for me and hope it carries me ~5 years like my original SE did :(
Score: 34 Votes (Like | Disagree)

youdontsay
I know lots of people here think the mini was just the result of listening to a minority of users with loud voices.
However I’m genuinely curious to see how the 2021 model (with stores opened) will do. I am using a mini ATM and I won’t go back to big phones. I think if people are able to actually see and use it, it might do better.
Score: 26 Votes (Like | Disagree)
Read All Comments