According to market data compiled by Counterpoint Research, Apple's smallest iPhone since the 2016 iPhone SE, the iPhone 12 mini, struggled to obtain a spot in the top five list of best-selling smartphones in January of this year. 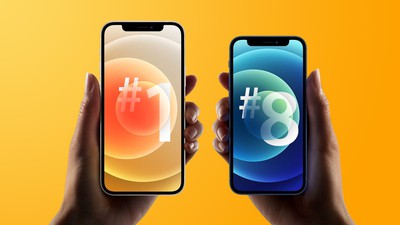 According to the market data, the ‌iPhone 12 mini‌ came in eighth place for the best-selling smartphone worldwide in the first month of the year. However, the iPhone 12, iPhone 12 Pro Max, iPhone 12 Pro, and last year’s iPhone 11 enjoyed dominance at the top of the list.

The 5.4-inch ‌iPhone‌ has widely been reported to to have suffered from disappointing sales, with Apple even reportedly cutting production due to "far lower" than expected demand. The smaller handset includes the same features as the larger 6.1-inch ‌iPhone 12‌, including the same camera system, chip, and overall design. The mini, however, includes a significantly smaller battery, and obviously, a less immersive display.

Despite its struggles, Apple is still reportedly planning to keep the 5.4-inch form factor alive in the 2021 iPhone 13 lineup. The newer handset, alongside the rest of the lineup, will likely benefit from improved battery life thanks to the power efficiency of the A15, which should address concerns from ‌iPhone 12 mini‌ customers about short battery life.

coachgq
And yet the 12 mini, free with bill credits after trade in of an iPhone 8 has been my favorite iPhone purchase to date.
Score: 61 Votes (Like | Disagree)

Moonjumper
7th place is still very good, and above the much cheaper SE. It is the iPhone I want, but I barely use my iPhone while stuck at home, so not upgrading yet. Sales for the most portable phone are the most likely to be reduced by lack of mobility during the pandemic.
Score: 46 Votes (Like | Disagree)

GuruZac
I really hope Apple doesn’t stop making the mini. I’m planning to upgrade my 11 Pro this year to the 13 Mini or whatever they call it.
Score: 43 Votes (Like | Disagree)

Krizoitz
MacRumors attempts to paint the 12 mini as a failure are both obvious and pathetic and I do not understand why. So it’s not the #1 most popular phone in the world. It’s primarily being beat by its siblings. It’s outselling all three Android models. 1% of ALL Smartphones sold in the world for January is still in the millions of phones. Drop the hate already it’s making you look bad.
Score: 34 Votes (Like | Disagree)

Force332
If it really is the 7th best selling smartphone of all the phones that can be purchased, is the iPhone 12 mini really a failure or disappointment? I can definitely see how it's surely selling much less than other iPhone models but compared against other smartphones, I'm sure it's selling really well. If in just iPhone-land it's selling better than the SE, I would hope that would justify enough keeping it around. If anything, I'm sure having it around increases the ASP of the iPhone as it increased the cost of the regular 12 compared to the 11.
Score: 34 Votes (Like | Disagree)

totom_
Alternative title: iPhones make up 4 of the 5 best-selling smartphones in January...
Score: 33 Votes (Like | Disagree)
Read All Comments