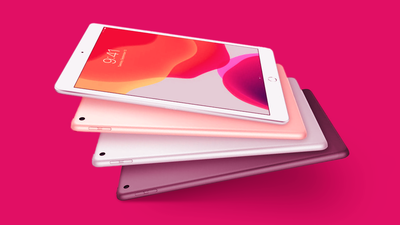 In a recent report that mainly focused on Apple's upcoming high-end iPad Pro models, Gurman explained that the company is planning to refresh the cheapest iPads in the product lineup too:

Apple plans to refresh its cheapest iPad aimed at students with a thinner and lighter design later this year, Bloomberg News has reported. It's also preparing to launch a new iPad mini with a larger screen as early as this year, an increase from the 7.9-inch display used since the first model.

Although Gurman was vague about the specifics of the updates, the details he included broadly align with prior rumors about the devices. Apple is believed to be working on a ninth-generation low-cost ‌iPad‌ with a 10.5-inch display, the A13 chip, 4GB RAM, and a thinner, lighter design.

Japanese site Mac Otakara claimed in January that the upcoming ninth-generation ‌iPad‌ will be similar in design to the third-generation iPad Air released in 2019. The display size is expected to remain the same at 10.2 inches, but it will be "significantly thinner" at 6.3mm. The current eighth-generation ‌iPad‌ is 7.5mm thick, so a 6.3mm chassis would mark a significant design change. It is also expected to be lighter at 460 grams, as opposed to the current 490 grams, and feature a display with an anti-reflective coating, P3 wide color support, and True Tone.

Both models will apparently continue to feature a Touch ID Home Button and a Lightning port to differentiate them from the higher-end ‌iPad Air‌ and iPad Pro, which have seen major updates in recent years, including a new design with squared-off edges, the addition of USB-C, and ‌Touch ID‌ in the Power Button or Face ID.

While Gurman simply says that the devices will arrive "later this year," other rumors have hinted that the updated ‌iPad‌ and ‌iPad mini‌ could arrive as soon as the spring.