Apple's rumored AirTags item trackers will be slightly larger than a 50 cent coin and around three times the thickness, based on dimensions offered by leaker Max Weinbach (via YouTube channel EverythingApplePro). 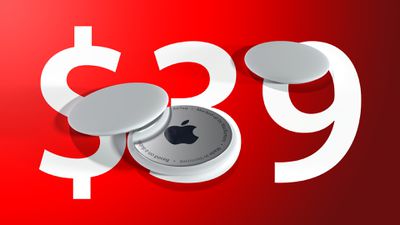 According to Weinbach, the ‌AirTags‌ will come in one size measuring 32mm x 32mm x 6mm, which would put the circular devices in the same ballpark diameter-wise as a half dollar piece – a bit smaller than Samsung's Galaxy SmartTags (39mm x 39mm x 9mm) and a little larger than a Tile Sticker (27mm x 7.3mm).

A previous rumor from L0vetodream suggested Apple would make ‌AirTags‌ available in two size options, but it's not really clear why two sizes would be required.

Based on images found within an internal build of iOS 13, ‌‌AirTags‌‌ are small, circular white tags with an Apple logo on the front. They will likely be attached to items via adhesive or an attachment point like a ring, and there may be multiple ways to use them with different items.

According to his retail sources, Weinbach says ‌AirTags‌ are estimated to be priced at around $39 each (Samsung's SmartTags are $29.99). When they'll be launched though remains the question.

A new "Items" tab enabled by default in the Find My app in the iOS 14.5 beta has led to some hope that Apple's long-awaited ‌AirTags‌ item trackers will finally be released soon. Apple said iOS 14.5 will be released in "early spring," but a specific release date remains unclear.

Weinbach also believes Apple will announce new products "soon," either via press release or some sort of event, although event rumors remain murky at best. According to a YouTube video by hit-or-miss leaker Jon Prosser, Apple plans to host an April event this year.

Prosser himself acknowledges that it's worth treating this April event rumor with some skepticism since it would be Apple's first April event in 11 years, but he does say the source he got this from has a perfect track record.

Either way, Weinbach's retail source tells him that they are expecting three new products to drop into the tablet, wearable, and accessories categories.

The wearables are "likely" to be new seasonable Apple Watch bands, new colors for the solo loop bands, and possibly a new band style. The rumored new iPad Pro is the new tablet, while ‌AirTags‌ will fall into the accessories category.

Volume shipments of mini-LED display components for a new 12.9-inch ‌iPad Pro‌ will reportedly begin in the second quarter of 2021, which spans April through June. Bloomberg's Mark Gurman has previously claimed that Apple plans to announce new iPads as early as April, including new 11-inch and 12.9-inch ‌iPad Pro‌ models.

Corsig
The longer I'm waiting for these the less interested I find myself wanting them. With that said I'll take 2.
Score: 27 Votes (Like | Disagree)

SirAnthonyHopkins
If the price is accurate that's mildly surprising, would make them only a shade more expensive than the Pro-level Tile, which is presumably where these would be competing rather than with the entry-level. Though I suppose there's a limit on how high they can price these and still have them hold any appeal; if you're paying $50+ for a thing that helps you find something, the value of that thing has to be pretty high to begin with ...
Score: 23 Votes (Like | Disagree)

jjudson
$200 to track five things in my house? I was hoping for better. Plus, larger than a .50 cent piece is pretty big. Bigger than some of the things I want to track.

unchecked
Would be mighty useful for pet owners. Or people who let their cats out so they can keep track where their feline masters are up to at night.
Score: 20 Votes (Like | Disagree)

TheMaJa
Battery life would be interesting to know
Score: 17 Votes (Like | Disagree)

Wednesday April 28, 2021 10:12 am PDT by Juli Clover
Prior to when Apple announced the AirTags, companies including Chipolo, VanMoof, and Belkin debuted products that are part of the Find My network accessory program, integrating directly with the Find My app so they can be tracked when lost. Of the three companies, Chipolo has the most AirTag-like device, a Bluetooth item tracker called the ONE Spot. Chipolo will need to compete with the...
Read Full Article • 109 comments