Apple's forthcoming iPhone 13 could include a 1TB storage option for some models and LiDAR Scanners across the entire lineup, according to a report from Wedbush analysts. 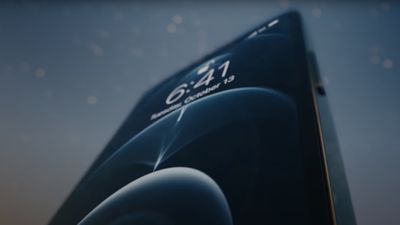 In a new note to investors, seen by MacRumors, Wedbush analyst Daniel Ives said that initial Asian supply chain checks gave the firm "increased confidence" that Apple's 5G-driven product cycle would extend well into 2022, and that this would be reflected in improved technical specifications.

Initial Asia supply chain builds for iPhone 13 are currently in the 100 million unit range compared to our initial iPhone 12 reads at 80 million units and represents a 25% increase YoY out of the gates. While this number will clearly move around over the coming months, we believe this speaks to an increased confidence with Cook & Co. that this 5G driven product cycle will extend well into 2022 and should also benefit from a post vaccine consumer "reopening environment." From a spec perspective, we have increased confidence that iPhone 13 will have a 1 terabyte storage option which is double from the highest Pro storage capacity today (512GB) and will also include a number of enhancements with Lidar across all iPhone 13 models.

Apple leaker Jon Prosser last month doubled down on an earlier claim that the ‌iPhone 13‌ lineup would feature a 1TB storage option. Apple currently only offers this capacity as an option in its iPad Pro models, but the additional storage would make sense for iPhone owners, especially those taking advantage of new photography features like ProRAW. ProRAW files are 10 to 12 times larger than HEIF or JPEG files, which means users will need a great deal more on-device storage or else pay for larger amounts of iCloud storage space.

A previous report has also suggested that Apple will expand its LiDAR Scanner to the entire ‌iPhone 13‌ lineup in 2021, rather than only the Pro and Pro Max models, as is the case in the current iPhone 12 series.

Looking ahead based on their initial build forecast for ‌iPhone 13‌, Wedbush analysts remain bullish about Apple's prospects in the smartphone market, suggesting the ‌iPhone 13‌ could be "a game changer indicating the supercycle party in Cupertino is going well in FY22."

Major design changes are not expected, but we can likely count on camera improvements, a faster A-series processor, and a new 5G chip from Qualcomm. Rumors suggest at least one ‌iPhone‌ in 2021 could feature a portless design that relies entirely on wireless charging rather than a Lightning port, though it's not clear if this will pan out.

Other rumors suggest a 120Hz ProMotion display could feature in this year's ‌iPhone‌. Apple could also shrink the notch in 2021, with one rumor suggesting a shallower notch with a reduced height rather than reduced width will be added to the ‌iPhone‌ lineup.

Apple is also said to be considering adding an in-display fingerprint sensor to the ‌iPhone 13‌ models, which would be used in addition to Face ID as an alternate biometric authentication method.

coolfactor
This whole LiDAR thing has largely slipped under the radar. LiDAR is nothing new... it goes back as far as 1963! But I guess the fact that they can embed the tech into a mobile phone is a big deal.
Score: 4 Votes (Like | Disagree)

We need nothing but cloud storage, they said.

When taking super-high resolution photos or recording 4K video, space is needed. So it's not so much for long-term storage, but active-use storage. iOS doees an amazing job at optimizing storage to the cloud!
Score: 3 Votes (Like | Disagree)

Probably 3 years at least, if the iPhone X was any indication.
Score: 3 Votes (Like | Disagree)

jayducharme
If there's a 13 mini with LiDAR, I'd be very tempted to upgrade.
Score: 3 Votes (Like | Disagree)

Moonjumper
An iPhone Mini with LiDAR and in-display fingerprint reader would be brilliant! I hope it happens.
Score: 3 Votes (Like | Disagree)

Seanm87
Every year they say the notch is shrinking

I’ll believe it when I see it
Score: 2 Votes (Like | Disagree)
Read All Comments

Saturday February 4, 2023 1:30 am PST by Hartley Charlton
Google's Chromium developers are working on an experimental web browser for iOS that would break Apple's browser engine restrictions, The Register reports. The experimental browser, which is being actively pursued by developers, uses Google's Blink engine. Yet if Google attempted to release it on the App Store, it would not pass Apple's App Review process. Apple's App Store rules dictate...
Read Full Article • 176 comments