Amid a spate of rumors in recent months about Apple's plans for a mixed reality headset and AR glasses, videos of Samsung's plans for its own AR glasses have purportedly leaked online (via The Verge). 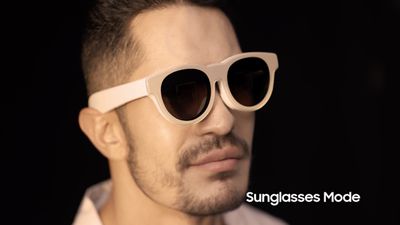 Samsung Glasses Lite can be used as a virtual movie theatre or a computer monitor, and the video shows various practical uses for this, such as piloting a drone with an overlaid first-person view. The glasses do not appear to be responsive to gestures, instead relying on a Samsung smartwatch for controls, or even a keyboard and mouse in "Dex" mode, and are seemingly incapable of displaying 3D objects or offering a wide field of view. The video also shows that Samsung Glasses Lite feature an auto-dimming "sunglasses mode."

Samsung AR Glasses appear to be a more capable, higher-end AR product akin to Microsoft's HoloLens. The device is able to display interactive 3D objects and environments with a wider field of view. Unlike Samsung Glasses Lite, Samsung AR Glasses look to be responsive to hand and arm gestures. It is reasonable to expect that the device's additional capabilities would result in a higher price tag.

It is unclear how closely these videos depict consumer-ready products or Samsung's imminent plans for AR glasses, but they do suggest that the company is planning to compete with similar products from Apple in the future. The devices appear to be clearly targeted at two different price points and offer one of the best looks yet at how tech companies may be planning to market AR glasses.

Last month, Samsung beat Apple's long-rumored AirTags product to launch with its SmartTags item trackers and it is possible that the company may be planning to do the same with AR glasses.

Total Respray
Apple has little to fear on the aesthetic front.
Score: 25 Votes (Like | Disagree)

Apple has little to fear on the aesthetic front.

That remains to be seen after the AirPods Max case. [emoji90]
Score: 11 Votes (Like | Disagree)

HeavenDynamic
There's no way I'd wear glasses if I don't medically have to.
Score: 10 Votes (Like | Disagree)
Read All Comments