Apple is unlikely to allow devices like Apple Watch, AirPods, and iPhone to wirelessly charge each other "in the near future," according to Bloomberg's Mark Gurman. 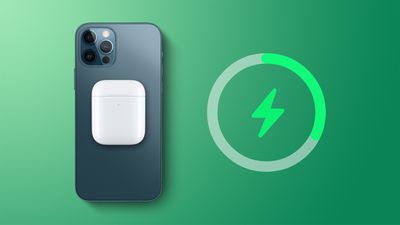 In a report outlining the development of MagSafe battery accessories for the iPhone 12 lineup, Bloomberg says that Apple has "internally discussed a goal of letting many of its mobile devices like Apple Watches, AirPods, and iPhones charge each other," however, the report notes that it's unlikely to be launched in "the near future." With the launch of the iPhone 11 series in 2019, Apple was planning, but then later scrapped plans to allow the ‌iPhone‌ to reverse charge AirPods, according to the report.

Earlier this week, evidence discovered by MacRumors in iOS 14.5 hinted at a possible MagSafe battery accessory. Code within the beta software reads, "To improve charging efficiency and maximize available battery life, the battery pack will keep your phone charged at around 90%."

Apple has been researching the ability for devices to charge each other for some time. Patents discovered in January reveal a concept of a future MacBook wirelessly charging an ‌iPhone‌ or Apple Watch on either side of the trackpad. The patent envisions an ecosystem in which devices are reliant on each other for charging, and presumably syncing.

Despite the feature not being officially released, the technology itself is already available within the ‌iPhone 12‌. According to FCC filings, all models in the ‌iPhone 12‌ lineup have the ability to reverse charge an Apple accessory on the back. The ‌iPhone‌ would serve as a wireless charging pad for devices with wireless charging compatibility such as the AirPods (second generation), AirPods Pro, and the Apple Watch Series 3 and later.

In theory, Apple could enable the feature with an iOS update, although there's no indication the company will. It could be holding off on enabling the feature until it releases the newly reported MagSafe battery accessories.

otternonsense
Is it because Apple is going through their most innovative period that these (pretty standard by now) features aren't seeing the light of day?
Score: 5 Votes (Like | Disagree)

Relentless Power
That’s one feature that I really like that Samsung offers with -inverse charging-, because I personally would really like to top off my AirPods or Apple Watch from my iPhone. I don’t think it’s a ‘make it or break it’ feature that it won’t be possibly included it in the future, but it’s that one piece of technology that would be nice to have when you need it if you didn’t have access to an external charger.

But for Apple, it might be doable for a feature, but if they don’t believe that it’s 100% on par to their standards, they won’t offer it, so I understand.
Score: 5 Votes (Like | Disagree)

dojoman
Very lilely reverse charging wil be on the external MagSafe charger pack it can charge both devices. I don’t see the logic of sacrificing your main device to charge accessories.
Score: 2 Votes (Like | Disagree)

phenste
Bloomberg, the most trustworthy news source around ?

(Jokes aside, I do kinda wish they would implement this. With how crazy good 12 Pro Max battery life is, it’d be cool to top off my AirPods/Watch with it. Alas)
Score: 2 Votes (Like | Disagree)

MJaP
I really miss not having this feature since switching to the Apple ecosystem. There have been a number of occassions when I've not had the appropriate charger with me that I realized I hadn't charged my Apple Watch up at it's sitting at 20%, or I didn't realise my Airpod case had run out of battery and my Airpods were on low charge, and I would have loved reverse charging just to give the particular peripheral a small top up to allow me to get through the day to when I would have access to the relevant charger again. It seems odd that it's not enabled if the iPhone is perfectly capable of doing it after all Apple ethos is all about providing the user with convenience and a seamless experience.
Score: 2 Votes (Like | Disagree)

I know not everyone is me, but this seems like a silly, frivolous, feature.

Silly for at home/work, but I think back to BC (before corona) times when I would travel or go backpacking or camping. I love carrying my watch and would LOVE to not carry an add'l charger.
Everyone usually has a Qi charger or lightning charger when you are out and about for charging your phone, and watches are becoming more common, but still not the same availability. I am hoping future watches move away from needing the Apple only charging solution and move to Qi or the reverse charging from the phone.
Score: 1 Votes (Like | Disagree)
Read All Comments

Friday October 15, 2021 1:29 pm PDT by Juli Clover
With the launch of the iPhone 12 models last year, Apple introduced a $129 MagSafe Duo Charger that's able to charge an iPhone and an Apple Watch at the same time, but it's unfortunately already outdated. The Apple Watch Series 7 has a new fast charging feature that requires an updated charging puck, and that means the Apple Watch Series 7 does not fast charge when connected to the MagSafe...
Read Full Article • 187 comments