A group of mobile advertising companies today announced the launch of the Post-IDFA Alliance, a partnership that's designed to help marketers and app developers adjust to the ad tracking changes that Apple is implementing with the launch of iOS 14.5, reports Reuters. 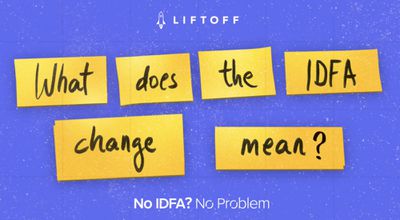 The Post-IDFA Alliance will offer up tips that will help advertisers and developers get effective ads in front of customers and measure the efficiency of those ad campaigns. The group is planning to offer videos, webinars, and other materials to help advertisers understand how to use data in an "Apple-friendly manner."

"No IDFA? No Problem," reads the website, which also offers articles like "What does the IDFA change mean? and "How does SKAdNetwork work?" SKAdNetwork is a privacy-focused ad platform that Apple is providing to developers as an alternative to current ad tracking measures.

The partnership includes Liftoff, Fyber, Chartboost, Singular, InMobi and Vungle, all of which are mobile advertising companies that will be impacted by Apple's upcoming changes.

Starting with the launch of iOS 14.5, Apple will begin enforcing App Tracking Transparency, a feature first announced when iOS 14 debuted following the Worldwide Developers Conference in June. Apple delayed the implementation of the feature to give developers extra time to adjust, but the delays are ending in early spring.

With App Tracking Transparency, developers are no longer able to access a user's IDFA or advertising identifier on the iPhone or the iPad without first obtaining express user permission. When access to the IDFA is declined, apps are also expected not to use workaround methods to track users against their wishes as well.

The IDFA is used by app developers and ad companies to track user behavior across apps and websites for ad targeting purposes, something that will no longer be possible when people begin declining to allow ad tracking functionality.

Users will be able to disable ad tracking on an app-by-app basis, with apps required to show a pop up that will ask users if they want to be tracked. Ad companies assume that the majority of people are going to decline this request, which will have a broad impact on advertising on iOS devices going forward.

Facebook has been the most vocally against Apple's planned ad tracking changes because App Tracking Transparency will impact Facebook's ad revenue. Facebook has claimed that Apple is harming small businesses, but Facebook's own employees have criticized the anti-Apple campaign and the EFF has called Facebook's efforts to get Apple to drop the privacy changes "laughable."

sniffies
The next thing Apple should kill is Spy Pixels in our emails.

[HEADING=1]We need to inflict even more pain on the parasitic Zuck. ?[/HEADING]
Score: 21 Votes (Like | Disagree)

deathcab
The level of response and/or resistance from the ad companies tell you all you need about the scope of the problem that Apple is trying to address here.
Score: 17 Votes (Like | Disagree)

I’m sure the ad guys will go back to Super Cookies with carriers and broadband companies. Sure you can opt out, which no one does since no one knows Super Cookies even exist and the process is laborious.

This needs regulation to stop the trickery.
Score: 9 Votes (Like | Disagree)

Hmm that makes me think.. maybe this will make apps abandon ads in favor of a subscription model or in-app purchases. So at the end of the day, Apple takes a (bigger) cut through fees.

But ads are different than being tracked...especially on every app that you use
Score: 7 Votes (Like | Disagree)

Yeah, but if ad revenue goes down, apps will have to find another source of income in order to survive. Right now is very expensive and hard to get a good roi when advertising in networks like AdWords. Without tracking it’s going to be even harder, companies will most likely have to purchase less ads. So apps will have to offer less free content and implement even more in-app purchases to survive.

Tracking and collecting user data without opting-in shouldn't be the foundation of a business. It's unethical and companies should've seen this problem long ago.
Score: 7 Votes (Like | Disagree)
Read All Comments