Amid a barrage of public attacks on Apple from Facebook over privacy measures, Facebook employees have expressed their displeasure with the direction of the campaign in comments obtained by BuzzFeed News. 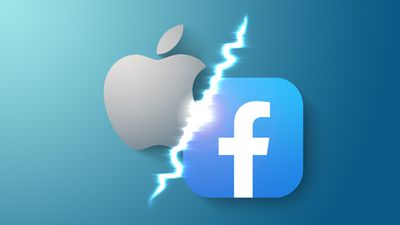 Last week, Facebook launched a campaign in print newspapers explaining that it was "standing up to Apple for small businesses everywhere," and created a website encouraging people to "Speak Up for Small Businesses."

Facebook argues that Apple's privacy changes in iOS 14, which give users the option to opt-out of ad tracking, will harm small businesses that see increased sales from personalized ads. However, some Facebook employees are reportedly complaining about what they perceived to be a self-serving campaign.

BuzzFeed News obtained internal comments from one of Facebook's private message boards and audio of a presentation to Facebook workers, revealing that there is discontentment among employees about the angle used to attack Apple's privacy changes. One Facebook engineer, in response to an internal post about the campaign from Facebook's advertising chief Dan Levy, said:

It feels like we are trying to justify doing a bad thing by hiding behind people with a sympathetic message.

Ahead of an internal meeting to explain the rationale of the campaign against Apple, Facebook employees asked and voted up several questions that focused on the consequences of the campaign on Facebook's public image. The most popular questions asked reportedly all expressed skepticism or concern:

Aren't we worried that our stance protecting [small- and medium-sized businesses] will backfire as people see it as "Facebook protecting their own business" instead?

People want "privacy," Facebook objecting here will be viewed with cynicism. Did we know this would be bad PR, and decide to publish anyway?

How do we pick a message that looks less self-serving?

In response, Facebook vice president of product marketing Graham Mudd said that the company has been "really clear" that Apple's changes do "have a financial impact on us," in addition to small businesses:

We're not trying to sweep that under the rug. We are, you know, a profitable, big company and we're going to get through this and adapt our products and so forth. But the real folks that are going to get hit by this are small businesses, and that's why we made them the focus of the message.

Following the presentation, many Facebook employees were apparently unconvinced. Some did not understand how Apple's changes would negatively affect small businesses, while one highlighted that Apple's privacy changes also prevent "malicious actors" from tracking people:

We're not going to… be the only ones that should be allowed to track people without their consent — any company can do that, even smaller startups and malicious actors.

The same employee launched a scathing attack on Levy's post, accompanied by a popular meme with the text "Are we the baddies?"

The only thing I'm hearing, again and again, is "this is bad for the businesses," and I'd really like someone at the top to explicitly say, "People are better off if they don't know what we're doing, if we don't have to explain ourselves to them, if they don't get a choice to opt-in or opt-out of our practices, if we obscure it as much as possible behind interesting features and then get them to accept surreptitious tracking on the back end as long as we downplay it."

Other critics suggested that Facebook incentivizes opting-in to ad tracking in a positive campaign rather than attacking the notion of a choice to opt-in or out. Levy responded to criticisms explaining that the campaign was simply "not about our business model."

That's Apple's marketing working and convincing you to scapegoat us so they can decide how the internet should work — even beyond their devices. I'm an optimist who works in technology because I think tech can be a lever for democratizing access and giving opportunity. Including for businesses. And if you think this is going to stop with personalized ads... well, then I disagree.

Other comments from employees highlighted that the spirited defense of small businesses was hypocritical because Facebook has repeatedly disabled the ad accounts of small business advertisers by mistake and increasingly uses automated customer support, leading to a plethora of public complaints from small businesses:

[They] highlight that we're probably not doing everything we can to "stand up for small [businesses]" when we don't provide human customer service support to small advertisers.

Since launching this effort we have heard from small businesses literally around the world who are worried about how these changes could hurt their businesses. Because this is such a critical time for [small- and medium-sized businesses], we will continue to share those stories with the public and our employees.

Following the launch of the campaign, the Electronic Frontier Foundation (EFF), a non-profit organization that defends civil liberties in the digital world, called Facebook's criticisms of tracking-related privacy measures "laughable."

bryce13950
This whole campaign shows an astronomical lack of self awareness. I cannot wait to watch Facebook get split up.
Score: 59 Votes (Like | Disagree)

baryon
The reason this is so wrong is because Facebook uses small businesses as an excuse to want to make more money. They could just have said "we don't want this change because it's bad for us and everyone who makes money thanks to us" but they specifically hide behind small businesses as if that's all they cared about when that's not at all what it's about.
Score: 47 Votes (Like | Disagree)

Steve Adams
I find it funny that facebook claims they are "standing up for small businesses" everywhere. I am a small business owner and if I want to market my businesses effectively on facebook, I have to pay money for it. A fair chunk too. The hypocrisy. Everytime I put a new post on one of my pages, Boost this and reach X number of potential customers for 250.00 bucks. How about giving the boosts etc for free for small business owners? that would be standing up for us!
Score: 31 Votes (Like | Disagree)

CJM
Great post, love seeing these internal debates in big companies. At least the debate is there.
Score: 25 Votes (Like | Disagree)

xxray
Facebook's own employees roasted their own company better than we ever could.

Also, I'm super against this idea that small businesses are more important than an individual having a choice over their privacy. In normal situations, heck yeah! Let's support small businesses! But am I going to root for a business that exploits data and privacy of others? Absolutely not. I hope they do fail if they need to do that to survive.