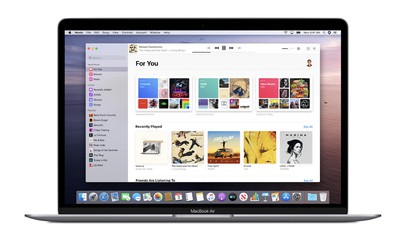 There is no word on whether the apps will be compatible with Windows PCs or if they are being developed for Microsoft's Xbox consoles. Apple in November released an Apple TV app that is compatible with the Xbox One, Series X, and Series S, so it's possible future Podcasts and Music apps will also be limited to consoles.

Apple could be planning to release these apps on Windows following the discontinuation of iTunes on the Mac, however. Right now, Apple continues to offer a version of iTunes designed for Windows machines, but the app is rarely updated and the interface could use an overhaul as it is not ideal for accessing services like Apple Music and Apple TV+.

Apple transitioned away from iTunes on the Mac in 2019 with the release of macOS Catalina, providing users with separate Music, TV, and Podcast apps.

Apple in November 2019 posted job listings for engineers to build "the next generation of media apps for Windows," so revamped media apps for Windows have likely been in the works for some time. At the time, Apple said that it was looking for engineers with experience using Universal Windows Platform, which allows for apps that work on Xbox and other Windows 10 platforms.

NOOOOOOOO not my precious iTunes!!

seriously though: is it possible to backup the iPhone with Music app on Mac?

You backup your iPhone on a Mac with Finder now. Just plug in your phone and you'll see it in the sidebar and go from there.
Score: 4 Votes (Like | Disagree)

So it should bring its apps to the Microsoft store! Being platform agnostic is important if you want your product to become ubiquitous.

Maybe Messages can be next.

That is a resounding NOPE. Messages will never be on another platform as the same way you will never see Apple Watch support Android or BMW's sold at a Ford Dealership.

Apple is smart enough and has learned from the late 90s not to let their crown jewel or this case jewels ever be taken out the castle again. Not everything needs to be shared as that is a sign of desperation and Apple is not that!
Score: 3 Votes (Like | Disagree)

number of "house calls" I've had to answer is due to family refusing to replace their computers with a Mac. and iCloud Photos via the web is such a terrible experience.
Score: 3 Votes (Like | Disagree)

Minxy
So it should bring its apps to the Microsoft store! Being platform agnostic is important if you want your product to become ubiquitous.

Maybe Messages can be next.
Score: 3 Votes (Like | Disagree)

JM
NOOOOOOOO not my precious iTunes!!

seriously though: is it possible to backup the iPhone with Music app on Mac?
Score: 3 Votes (Like | Disagree)

ouimetnick
As someone who has no intention of using Apple’s services, I’ll stick with iTunes. As clunky as it is and as much as I dislike it, at least I’m not getting spammed with Apple Music or Apple TV+ offers frequently. Apple Music is very buggy for those with their own music library. It screwed up my lyrics and album artwork so I went back to Mojave. Good thing for keeping a proper backup!
Score: 3 Votes (Like | Disagree)
Read All Comments

Friday May 28, 2021 2:49 pm PDT by Juli Clover
Apple today informed podcast creators that use the Apple Podcasts platform that the rollout of Podcasts Subscriptions and channels will be delayed until June to make sure that the "best experience" is being provided to creators and listeners. We're writing to provide an update on the availability of Apple Podcasts Subscriptions and channels. We've been delighted by the response to last month's ...
Read Full Article • 69 comments

Monday April 19, 2021 5:26 am PDT by Hartley Charlton
Apple may announce a podcasts subscription service at its "Spring Loaded" event tomorrow, according to Vox's Peter Kafka and findings in the beta of iOS 14.5. Kafka remarked in a tweet, spotted by 9to5Mac, that he is "pretty sure Apple is prepping its own podcast plan - a paid subscription service - on Tuesday." MacRumors contributor Steve Moser has now said that Kafka's claim lines up with...
Read Full Article • 104 comments

Deals: New Discounts Arrive for Apple's MagSafe and MagSafe Duo Chargers (Save Up to $27)