An Apple TV+ series chronicling the rise of controversial blogging network Gawker Media was reportedly canned after Tim Cook learned about the project and intervened, according to a new report. 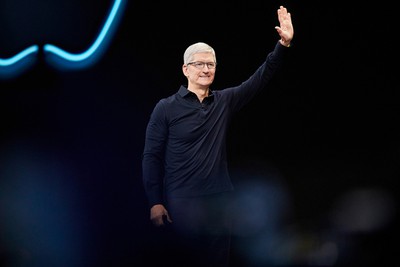 Earlier this year, Vanity Fair claimed Apple was in the early stages of developing a series about Gawker. Called "Scraper," the series was reportedly pitched by two former Gawker staffers, Max Read and Cord Jefferson.

According to a New York Times report on Sunday, however, Apple scrapped the show after Cook heard about its development. Sources told the publication that Cook was "surprised" to learn Apple was making the show and emailed an Apple executive to express his "distinctly negative view" towards the project.

Mr. Cook, according to two people briefed on the email, was surprised to learn that his company was making a show about Gawker, which had humiliated the company at various times and famously outed him, back in 2008, as gay. He expressed a distinctly negative view toward Gawker, the people said. Apple proceeded to kill the project. And now, the show is back on the market and the executive who brought it in, Layne Eskridge, has left the company. Gawker, it seems, is making trouble again.

As the report notes, Apple had a fraught relationship with the now-defunct media company. Notably in 2010, it was Gawker-owned Gizmodo that got its hands on an iPhone 4 prototype that had been accidentally left in a bar by an Apple employee.

This isn't the first time we've heard about Apple executives influencing ‌Apple TV+‌ content development. In 2018, the Wall Street Journal reported that Cook killed off a Dr Dre biopic "Vital Signs" after being troubled by the show's scenes depicting drawn guns, sex, and drug use.

In addition, Sunday's NYT report claims that Eddy Cue, Apple's senior VP for internet software and services, has informed ‌Apple TV+‌ partners that "the two things we will never do are hard-core nudity and China."

As the report notes, Apple has explained its "corporate red lines" to creators before. As early as 2018, when Apple's original programming production got underway, company executives reportedly gave guidance to some show creators to "avoid portraying China in a bad light."

The full report about the Gawker show development and ‌Tim Cook‌'s intervention is available to read at The New York Times.

A bit sad honestly. I'm hoping for a day when they don't have to give in to China anymore.
Score: 45 Votes (Like | Disagree)

In addition, Sunday's NYT report claims that Eddy Cue, Apple's senior VP for internet software and services, has informed Apple TV+ partners that "the two things we will never do are hard-core nudity and China."

That's the only part that unsettles me. So if someone wants to make a documentary about concentration camps in China, Apple won't allow it because it has to lick China's butt. I mean of course, it makes sense that China would be upset if Apple did that. I'm sure Hitler would not have allowed documentaries about concentration camps either, it makes perfect sense. But that doesn't mean it shouldn't upset you to your core.

To say that you're a pro human rights, pro-environment, modern-thinking company to show that you stand on the good side of the ethical scale, while openly participating in the censorship of genocide by an all-powerful communist dictatorship is just totally hypocritical. Because when it happens to benefit YOU financially, you say the right things. But when it doesn't, you do the opposite. Apple's main customers are young, modern-thinking open-minded people who are in majority pro LGBT, no wonder Apple is openly supporting gay rights. Not because they believe in it, but because it benefits them financially. If Russia was their manufacturing partner, Apple would be as anti-gay as it can be.

There's a point where you can say "yeah but I don't want to get involved in the politics of another country". Yeah yeah, whatever, you just make electronics, whatever. But now you've gotten involved in film production, which is a powerful art form that can help change the world, get information out to people in ways that no other medium can. And what is your first rule about that? No China. You're censoring it. You're not just censuring it in China (like YouTube or Facebook), you're censuring it everywhere, for everyone. So get this: an American can't make an American documentary criticizing China, for an American audience, if Apple is the producer. Chinese censorship has successfully bled into the "free world" through Apple.

Apple wants you to just keep producing mind-numbing, entertaining, boredom-fighting films, as long as it doesn't question the world we live in, as long as it isn't actually informative and upsetting. The kinds of stuff you'd watch to chill after a long day of work. That's not what films are for, it's just what they have become. Art is more than that, it has a purpose, and people are actively working on taking that purpose away and dumbing it down so people stay stupid.

Don't think about China. Think about... the new iPhone. It has 19 cameras.

So why not just make your documentary elsewhere? Well eventually everyone will depend on China and no one will want to take the risk. China will not hesitate to ban anything, and that's a whole lot of money lost if it happens. So no one will really hear about the concentration camps because it's not in anyone's interest to talk about it. Sound familiar? Mind your own business, keep working and buying the expensive products and don't ask too many questions. Yes yes, you live in a free country with free speech, on the condition that you don't talk about certain topics.
Score: 24 Votes (Like | Disagree)

Well, in contrast to hard core violence, nudity, sex and all that goes with it are a core thing of human existence and survival, thus it is natural and we Europeans see it as such.

Why a society glorifies violence and brutality so much and has a problem with nudity even in a sauna is beyond me.
Score: 24 Votes (Like | Disagree)

Their TV channel Aople can show whatever they like. If it is great story then another streaming service will pay for it and show it.
Score: 22 Votes (Like | Disagree)

It's a company, not a government...
Score: 17 Votes (Like | Disagree)
Read All Comments

Wednesday January 13, 2021 4:08 am PST by Tim Hardwick
Apple today announced a set of new projects as part of its $100 million Racial Equity and Justice Initiative (REJI) to help dismantle systemic barriers to opportunity and combat injustices faced by communities of color. Rendering of the Propel Center The projects include the Propel Center, a global innovation and learning hub for Historically Black Colleges and Universities (HBCUs), an Apple ...
Read Full Article • 597 comments

Wednesday December 16, 2020 2:13 pm PST by Juli Clover
Apple is in talks to acquire the rights to two animated films from Skydance Animation, which is headed up by John Lasseter, reports Variety. Lasseter is the former chief creative officer of Walt Disney Animation Studios and Pixar, but he departed the company in 2018 following allegations of sexual misconduct and has been at Skydance Animation since 2019. Prior to joining Skydance Animation,...
Read Full Article • 41 comments

Sunday July 19, 2020 6:57 pm PDT by Frank McShan
Apple this weekend has honored the life of late politician and civil rights leader John Lewis with a full-page tribute on its website. A photo of Lewis is accompanied by a quote of his: "Never, ever be afraid to make some noise and get in good trouble, necessary trouble." Apple CEO Tim Cook yesterday commemorated Lewis in a follow-up tweet. We have lost an American hero. John Lewis guided ...
Read Full Article • 110 comments