Apple today released iOS 14.2.1, a bug fix update that comes two weeks after the launch of iOS 14.2 and is available for Apple's new iPhone 12 models. 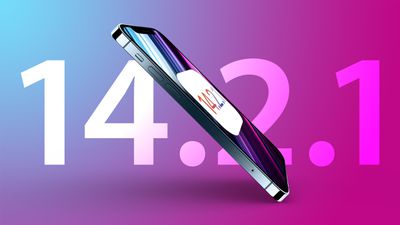 The iOS 14.2.1 update can be downloaded for free and it is available on all eligible devices over-the-air in the Settings app. To access the new software, go to Settings > General > Software Update.

It also includes a fix for Made for iPhone hearing devices that were experiencing sound quality issues. Apple's release notes are below.

iOS 14.2.1 addresses the following issues for your iPhone:
- Some MMS messages may not be received
- Made for iPhone hearing devices could have sound quality issues when listening to audio from iPhone
- Lock Screen could become unresponsive on iPhone 12 mini

There have been multiple complaints about all of these issues. For the ‌iPhone 12 mini‌, users were seeing problems when swiping up from the bottom of the Lock Screen or when pressing the flashlight or camera buttons.

The missing text messages primarily affected ‌iPhone‌ users who were in group chats with Android users, with the bug causing some Android text messages to fail to show up in the chat.

Apple did not acknowledge these problems, but there was a support document on the third issue, which was causing some people with Made for ‌iPhone‌ hearing aids and devices to experience unexpected noises like loud static or intermittent audio.

Apple is also testing iOS 14.3, and has seeded two betas of that update to developers so far. iOS 14.3 brings ProRAW functionality to the new iPhones and it also will introduce the Fitness+ service.

Pirate!
Does this fix the delay in text showing up when typing texts as well?
Score: 26 Votes (Like | Disagree)

Serban55
That was fast, Thank you Apple
At least you fix your own mistakes quickly
Score: 13 Votes (Like | Disagree)

So I updated to the new 14.2 for no reason? Why release that then this 18 hours later??

14.2 came out 2 weeks ago. Apple aren’t going to keep this update held back because you updated 18 hours ago.
Score: 12 Votes (Like | Disagree)

Pretty sure it's available for all supported devices.

I actually think its iphone 12s only
Score: 10 Votes (Like | Disagree)

Hamsterhjulet
Does this fix the missing notification on texts? It’s so annoying that I need to check messages once in a while to see if I’ve got new messages.
Score: 9 Votes (Like | Disagree)

People still send MMS? I haven’t used that since Nokia was a thing and even then only sent them by mistake, costing you 49 cent a piece from your 5 euro prepaid card lol. Not sure if those are even still working here.

Cause some of us have friends that have Android devices and seriously want to send an image attached.

Then again, if I sever all my Android friends, I won't need this update! I'm friending wrong!
Score: 9 Votes (Like | Disagree)
Read All Comments

Tuesday January 18, 2022 6:28 pm PST by Joe Rossignol
Over the weekend, we reported on a bug in WebKit's implementation of a JavaScript API called IndexedDB that can reveal your recent browsing history and even your identity, according to browser fingerprinting service FingerprintJS. Apple has since prepared a fix for the bug, according to a WebKit commit on GitHub, but the fix will not be available to users until Apple releases macOS Monterey, ...
Read Full Article • 73 comments