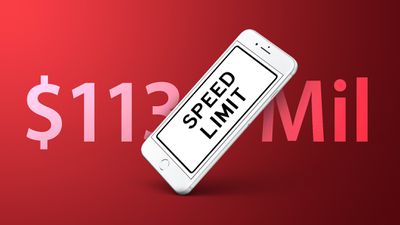 The investigation has now concluded, and Apple has opted to pay $113 million to settle the matter, reports The Washington Post. Apple has also agreed to be more transparent about similar changes to iOS devices in the future, providing more detail about battery health and power management.

"Big Tech must stop manipulating consumers and tell them the whole truth about their practices and products. I'm committed to holding these goliath technology companies to account if they conceal the truth from their users."

The investigation involved 34 states and the District of Columbia, and it concerned the 2017 controversy that Apple was embroiled in after quietly adding a power management feature to iPhones in iOS 10.2.1.

Apple's feature was meant to eliminate unexpected shutdowns that older iPhones were experiencing due to exhausted batteries, but it did so through throttling the maximum performance of devices with chemically aged batteries.

Apple did not disclose the throttling when releasing the updates, and customers were outraged when it was discovered that ‌iPhone‌ performance was being downgraded. While Apple said that it implemented the feature to make sure iPhones lasted as long as possible even as the battery began to fail, customers and regulators saw it as evidence of planned obsolescence.

After the throttling was discovered, Apple apologized and launched a battery replacement program that saw the company offering batteries for older devices for $29. Replacing a failing battery successfully fixes the problem that leads to shutdowns.

Apple offered lower-cost batteries for a year, and also added new battery management features to iOS that encourage customers to replace their battery when needed and allow throttling to be shut off. Apple has also already shelled out $500 million to settle a class action lawsuit over the issue.

...this entire lawsuit is dumb and should not have even happeend.
Score: 18 Votes (Like | Disagree)

Slap on the wrist.

Slap on the wrist? its the complainers that should be slapped. Apple did the right thing, perhaps they messaged it poorly, but in the end they were working to help older phones retain their ability to make emergency phone calls when power was low. And people who do not understand the technical facts just spread more falsehoods. Just goes to show, no good deed goes unpunished. Yep, I know, my position is unpopular. Oh well.
Score: 18 Votes (Like | Disagree)

BuffaloTF
Frivolous. If they only messaged it better out of the gate, this would have been viewed as a good thing.
Score: 15 Votes (Like | Disagree)

williamyx
The posturing from the Arizona state AG about going against the goliath of big tech is a tad disgusting.

Save your stones for the real issues.
Score: 15 Votes (Like | Disagree)

"Big Tech must stop manipulating consumers and tell them the whole truth about their practices and products. I'm committed to holding these goliath technology companies to account if they conceal the truth from their users."

This wasn't manipulation of customers, this is customers not understanding technology and nurturing their paranoid delusions about how the world is out to get them.
Score: 8 Votes (Like | Disagree)

macduke
The article forgot to mention that Apple went one step further and is optimizing battery charging in iOS so that it doesn't stay at 100% for too long. It learns when you usually begin using your iPhone for the day and charges the last 5-10% or so right before you need it. This should help maximize battery lifespan as well.
Score: 6 Votes (Like | Disagree)
Read All Comments

Wednesday February 2, 2022 2:24 am PST by Tim Hardwick
A man has been sentenced to 26 months time served in prison for his involvement in a conspiracy to defraud Apple out of more than $1 million by tricking the company into replacing hundreds of fake iPhones with authentic handsets through its warranty program. Haiteng Wu, 32, a Chinese engineering post-graduate residing in McLean, Virginia, immigrated to the United States in 2013 and secured...
Read Full Article • 83 comments

Wednesday November 3, 2021 3:14 am PDT by Hartley Charlton
Apple's latest MacBook Pro models have a raft of new features, including the M1 Pro and M1 Max chips, mini-LED displays with ProMotion, an HDMI port, an SDXC card slot, fast charging with MagSafe 3, and more. As the first teardowns start to be shared online, iFixit has revealed a previously unknown improvement with the new machines. In its 14-inch MacBook Pro teardown, iFixit explained that...
Read Full Article

Thursday October 21, 2021 3:32 pm PDT by Juli Clover
Apple is facing yet another investigation by U.S. regulators, this time from the Consumer Financial Protection Bureau (CFPB). The CFPB, which is investigating the business practices of companies operating payment systems, today announced that it has asked Apple, Google, Facebook, Amazon, PayPal, and Square to provide details on their consumer data practices. The CFPB is seeking information...
Read Full Article • 52 comments