Earlier this week, Japanese publication Nikkan Kogyo Shimbun reported that Sony will supply Apple with OLED microdisplays for its widely rumored AR/VR glasses, as spotted by Mac Otakara. The report has since been corroborated by display industry analyst Ross Young, who said multiple sources have informed him that Apple is indeed planning to use Sony's microdisplay technology for its head-mounted accessory. 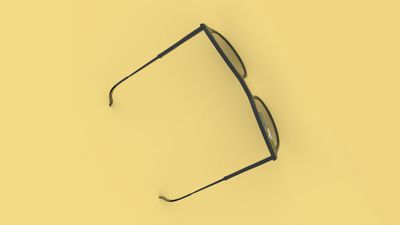 A generic mockup of AR glasses
According to FRAMOS, a supplier of embedded vision technologies, Sony's OLED microdisplays are small, cutting-edge displays with an ultra-fast response rate, ultra-high contrast, a wide color gamut for precise color reproduction, high luminance, low reflectance, and other benefits that would be ideal for Apple's glasses:

Sony's microdisplays also have integrated drivers for a thin and light design, and power-saving modes are available for longer battery life.

Young said the glasses will use a 0.5-inch display with a 1,280x960 resolution, and these specs appear to correspond with Sony's ECX337A component. According to Sony's website, this microdisplay in particular has a max brightness of 1,000 nits, an ultra-high contrast of 100,000:1, and an ultra-fast response rate of 0.01 ms or less.

The high contrast provided by Sony's microdisplays allows an additional information layer to appear seamlessly, and not as an overlay. "This information is simply added to the background for a 'real AR' experience," according to FRAMOS.

According to the Nikkan Kogyo Shimbun, Apple plans to release its AR/VR glasses in 2021, but analyst Ming-Chi Kuo does not expect a release until 2022 at the earliest. Young also believes that the glasses will be introduced in the first half of 2022. For a recap of all rumors to date, be sure to read our detailed Apple Glasses roundup.

CarlJ
Very curious to see what Apple comes up with. Tim has dropped enough hints about AR that I expect it’ll be pretty compelling (he doesn’t casually hint about many other things the way he does about AR).

Of course, there will be a contingent along to say, “Did you learn nothing from Google Glass?” Yes, yes we did. We learned that Google can’t be trusted to hold onto a product until it’s ready to ship, they throw crappy prototypes out there in public and give the whole endeavor a bad name, and then throw in the towel. That’s not how Apple generally operates.
Score: 16 Votes (Like | Disagree)

What's the point of these things? Google failed miserably in this as will Apple

They call that a loser attitude.
Just because someone else failed, doesn't mean you will.
I hope you don't treat yourself with the same mindset.
Score: 14 Votes (Like | Disagree)

insomniac86
AR will only really take off once Glasses are mainstream. No one wants to view a world through their tiny phone screen, or by holding up a large iPad.
Score: 12 Votes (Like | Disagree)

Justin Cymbal
I can’t wait for Apple to make these glasses! I wear prescription glasses so this would definitely be great for me

I think there are a lot of possible use cases for the Apple glasses - It would be nice to see notifications that are important without having to glance down at the Apple Watch
Score: 6 Votes (Like | Disagree)

Although AR glasses present interesting use-cases (and invasions of privacy too- i.e. glassholes), I'm still not convinced the wider general public will accept having to wear glasses, especially by people who don't wear them to begin with. Apple will have its work cut out trying to market them, IMO.

While not many people wear reading glasses, majority of the population do wear sunnies.
I also recall EVERYONE saying Apple Watch - "Ptfff.. Who the hell wears a watch anymore?"
And truth is at the time, most people didn't wear a watch unless it was a luxury watch to look the part.
However these days, I see smart watches on almost everyones wrist.
Score: 4 Votes (Like | Disagree)
Read All Comments

Saturday February 4, 2023 10:05 am PST by Eric Slivka
Online retailer TigerDirect has slashed pricing on the M1 iPad Air in several colors, offering the base 64GB configuration for just $313.99 in Purple and Pink. Note: MacRumors is an affiliate partner with TigerDirect. When you click a link and make a purchase, we may receive a small payment, which helps us keep the site running. That's a savings of 48% compared to Apple's normal $599.00...
Read Full Article • 423 comments