Samsung on its social channels is mocking Apple for removing the power adapter from the iPhone 12 lineup and other iPhone models, pointing out the fact that the Samsung Galaxy smartphones continue to ship with a power adapter. 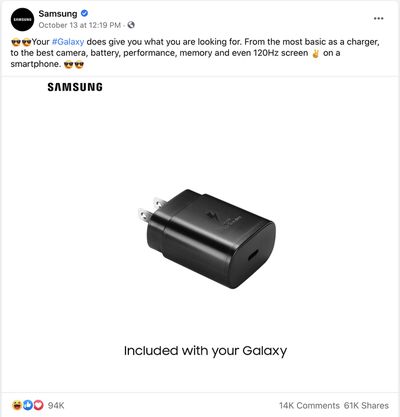 "Included with your Galaxy," reads a Samsung Facebook post that features a picture of a power adapter.

Apple notably is no longer providing power adapters or EarPods with ‌iPhone‌ purchases, a change applicable to the new iPhone 12 models and new purchases of iPhone 11, iPhone SE, and ‌iPhone‌ XR models. Apple says that the change will let it cut down on carbon emissions both through the elimination of the accessories and through the smaller box size iPhones now use.

Apple at Tuesday's event said the shift was made for environmental reasons, but there has been speculation that Apple may have removed the accessories to cut costs due to the expense of the 5G modems used in the new ‌iPhone‌ lineup. Apple's iPhones ship with just a USB-C to Lightning cable, and power adapters and headphones must be purchased separately.

Though Samsung is touting the USB-C power adapter that comes with current Galaxy models, rumors have suggested that Samsung too plans to stop including chargers in the boxes of some of its smartphones starting in 2021. Samsung is allegedly planning to nix power adapters because chargers "have become widespread" and doing so will cut production costs.

It's not clear if this will happen, and Samsung may opt to keep offering power adapters to differentiate its smartphones from Apple's iPhones. Samsung did, however, make fun of Apple for removing the headphone jack from the ‌iPhone‌ 7 in 2016 before copying the decision and releasing the 2018 Galaxy A8 without a headphone jack.

Samsung has a long history of mocking Apple's design and product decisions, oftentimes prior to adopting some of the same changes. Samsung this year is targeting the ‌iPhone 12‌, which competes with its Galaxy Note20 5G and Galaxy S20 5G lineup. In addition to the rib about the power adapter, Samsung has also shared a tweet that mocks Apple for being late to introduce 5G.

Some people are just saying hi to speed now, we've been friends for a while. Get your Galaxy 5G device now. https://t.co/yNxIoxGt4h pic.twitter.com/bC1YOLe4gc — Samsung Mobile US (@SamsungMobileUS) October 13, 2020

edk99
Until next year when they ditch it too.
Score: 278 Votes (Like | Disagree)

Kylo83
Can’t stand them, they always mock apple then end up copying them, and there phones have 120hz with limitations so no Samsung nice try
Score: 72 Votes (Like | Disagree)

SevrinDantus
We know, we know samsung....
You did the same thing with the iphone not user replaceble battery, with no headphone jack....and now with the charger...but after a time, you will come along and take the same idea and apply to your own products as well
Samsung the biggest "hypocrite" company
Score: 71 Votes (Like | Disagree)

EDIT: Also best performance on a smartphone? They can't even match the performance of the A13 from last year let alone this new A14 chip.
Score: 46 Votes (Like | Disagree)

Oblivious.Robot
Chances are they'd copy and do the same thing a year or two later.
Score: 32 Votes (Like | Disagree)
Read All Comments

Friday July 23, 2021 2:52 am PDT by Sami Fathi
The iPhone 13 may support faster-charging speeds with a 25W power adapter, compared to the current limitation of the iPhone 12, which only supports fast charging at up to 20W, according to a rumor originating from China. The iPhone 12 supports fast charging with a 20W or higher power adapter; however, even if users use a more powerful wall adapter, the iPhone itself only supports up to 20W....
Read Full Article • 127 comments