Apple is planning to hold an event in the latter half of October that will see the unveiling of the iPhone 12 models, Apple Watch Series 6, and long-rumored AirTags, according to a report from Japanese site Mac Otakara. 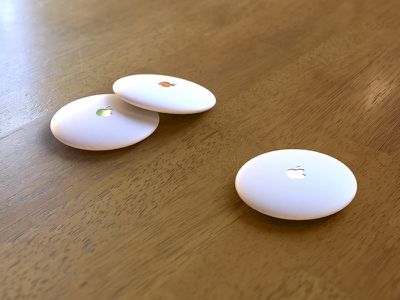 Citing rumors from "Chinese suppliers," Mac Otakara suggests that Apple initially planned to release the ‌AirTags‌ around the same time that the 2020 iPhone SE was launched, but it was delayed.

Apple in late July confirmed that this year's iPhones are going to be a little bit late, launching a "few weeks later" than the normal September timeframe. The ‌iPhone 12‌ lineup is expected to be released at some point in October, and the delay has led to speculation and uncertainty about when Apple might hold its annual fall event.

The iPhone unveiling event normally takes place in the first or second week of September, and it's not clear if Apple will hold the event in its usual timeframe and then delay the launch of the iPhones until October, or wait until October for the unveiling.

Mac Otakara's information contradicts information shared by leaker Jon Prosser, who has suggested Apple plans to unveil the Apple Watch and new iPads via press release in September and then hold an event in October for the iPhones. Apple has never decoupled ‌iPhone‌ and Apple Watch launches, so there has been some skepticism about this prediction.

As for the ‌AirTags‌, code for the Tile-like Bluetooth tracking devices have been spotted in iOS updates as far back as the iOS 13 betas, so they've been in the works for quite some time. It's never been clear when the ‌AirTags‌ are going to launch, but there have been rumors about a 2020 debut, and we're closing in on the end of 2020.

Mac Otakara suggests that ‌AirTags‌ will work with Apple's App Clips feature that lets users download small snippets of an app without downloading the entire thing, such as for ordering from a restaurant, but it's not clear how this would work given that ‌AirTags‌ are meant to work inside the Find My app.

For more information on what ‌AirTags‌ are and how we expect them to work, make sure to check out our AirTags guide.

Update: A new report by Bloomberg's Mark Gurman and Debby Wu has also discussed ‌AirTags‌, the ‌iPhone 12‌, and the Apple Watch Series 6.

The report says that the two lower-end 5.4 and 6.1-inch ‌iPhone 12‌ devices are expected to ship out ahead of the 6.1 and 6.7-inch Pro devices, and the 2020 launch timeline is set to be the latest release since the ‌‌iPhone‌‌ X came out in November 2017. Two new Apple Watch versions, including a Series 6 model and a new replacement for the Series 3 that will serve as a low-cost option, are also reported to be coming this fall.

The report explains that ‌AirTags‌ are in the works, with no further information on a potential launch timeframe. Gurman has previously said that ‌AirTags‌ will be a premium product and come with a leather carrying case.

Can we stop saying event when it's clearly going to be a pre-recorded thing or just a press release.

roland.g
All New Apple TV remotes need to have AirTags embedded in the remote.
Score: 13 Votes (Like | Disagree)

Lounge vibes 05
I’m almost 100% sure the watches are coming sooner than that. Literally, every single watch is pushed way back on Apple‘s website. That never happens if the watch is still a month or two months away. So my guess is, like Jon said before, Apple Watch, iPad (2020) and iPad Air (2020) next week. These are all rumored to be updates that really don’t need stage time.
then next month, we get an event with the iPhone 12 and 12 pros, AirPods studio, airtags, and an introduction of the first ARM Mac. some wild cards are a HomePod mini, new Apple TV, AirPods X sport headphones, and AirPower. But as I said, those are all wild cards.
Score: 9 Votes (Like | Disagree)

My fingers are still crossed for next week! I’m ready to upgrade my old S2!
Score: 6 Votes (Like | Disagree)

Mescagnus
Second half of October?! That's an eternity away!
Score: 6 Votes (Like | Disagree)
Read All Comments